You are here: Home / Fiction / Mystery/Suspense / For What Is Sacred by F.J. Harmon 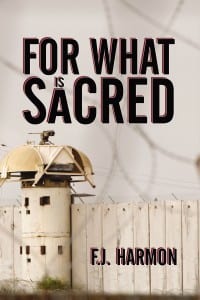 Mossad agent Amirrah has survived an attempt on her life and her passion is to stop the mastermind behind the 911 attacks, Mukhtar Sheik Mohammed. He is obsessed with revenge, and has drugged Amirrah’s lover and forced him to arm his nuclear bomb. He is determined to exact his due from the twin demons Israel and the United States. Mukhtar exploits Israel’s desperate need for oil and the prime ministers lust for power, and uses his reluctant nephew Jacob, as a pawn, convincing him that the Israels killed his grandfather and Amirrah. Blinded by hate, his nephew throws his passion into the task. Delighted, his uncle’s knows his revenge will be complete by putting the face of a Jew on the perpetrator in what will be known as the terrorist story from Gaza.

How is Writing In Your Genre Different from Others?
In writing a thriller pace is paramount. Intense action scenes must be set up before hand so that the action can be vividly painted with a minimum of pace deadening description.

What Advice Would You Give Aspiring Writers?
Just write. If you can’t figure out where you want a story to go, just write the story will emerge. If you outline in detail at some point you must just let the story tell itself, so there again, just write.

Author Bio:
I was born and raised in Michigan, graduating from Lawrence Technological University with a degree in Electrical Engineering. With the Vietnam War hot at the time I went straight to Officer Candidate School, was commissioned as an Ensign, and began my career in Naval Intelligence. After a short stint on active duty, I moved to Maryland and pursued duel careers as a Naval Reserve Intelligence analyst and as a national intelligence technical analyst working at various agencies over my career such as the National Security Agency, Central Intelligence Agency and Defense Intelligence Agency. For thirty-six years my writing was confined to technical documents, position papers and contract proposals, not exactly the stuff of fiction. My urge to write fiction was kept on the “back burner” until my retirement in 2007.

What Inspired You to Write Your Book?
I was inspired by a proposal by the state of North Carolina. They proposed to build a deep-sea port between a nuclear power plant and a nuclear arms depot, which to many seemed to be present an ideal terrorist target.