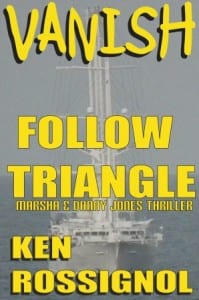 Join Marsha & Danny Jones as they continue to secure the safety of the Sea Empress, now on its way to the Caribbean. Sen. Lyndon Langdon, the choice of the President to fill a coming vacancy on the Supreme Court is onboard. An expert is on the ship to discuss the history of the Bermuda Triangle. The Sea Empress arrives at St. Thomas to a remarkable discovery.

After covering hard news for 22 years while publishing a weekly newspaper, Rossignol sold the newspaper in 2010 and has begun devoting full time to writing.
The story of the St. Mary’s Today newspaper is now available in Kindle and paperback at Amazon: The Story of THE RAG! The book includes nearly 200 editorial cartoons that appeared over the years.
There are now two new books with scores of great short stories from THE CHESAPEAKE, a fun fishing and nonsense monthly publication which covers all manner of recreation, travel, fishing and hunting in and around the Chesapeake Bay and elsewhere in one endeavor produced with Cap’n Larry Jarboe.
The Chesapeake: Scales & Tales and The Chesapeake: Legends, Yarns & Barnacles.
Rossignol also publishes the DWIHitParade.com.
The first in a series book, The Privateer Clause was released in 2010 and in 2011, Return of the Sea Empress hit the waves. The third in the series now available at Kindle: Join Marsha and Danny Jones on the latest cruise of The Sea Empress as the ship traces the fateful route of the RMS Titanic 100 years following the disaster. Follow Titanic!
Marsha and Danny Jones star in this series, killing terrorists and enjoying lobster spaghetti on a saiboat off the coast of St. Vincent. Shopping in St. Thomas is dangerous and thats not counting the merchants.