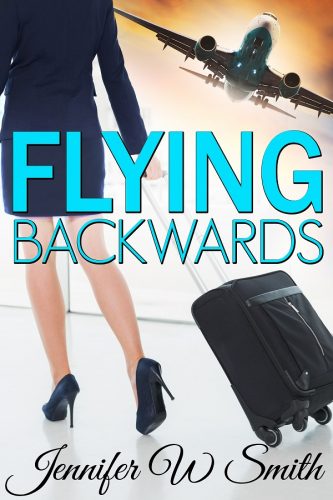 Would it be exciting to travel to exotic places, meet a man who makes your heart summersault, and become a person you admire? Eleanor (Nora) Clark realizes the key to an interesting life is eluding her. Never leaving the small Pennsylvania town she grew up in, living in a house her fiancé bought his ex-girlfriend, and spending weekends helping in the family business. She realizes life is passing her by as her twenty-ninth birthday looms on the horizon. Why hasn’t she taken any gutsy chances in life?

On a whim, she applies to become a flight attendant. Suddenly, she is jetting off to London, Rome, and St. Petersburg where she finds herself romantically entangled with three very different suitors. Eleanor’s new life exceeds all her wildest dreams.

To find fulfillment, Eleanor must discover success, confidence, friendship, and love. As her daydreams become reality, the choices she makes both build and break her heart. But her last choice decides it all.

How Did You Come up With Your Characters?
Eleanor (Nora) Clark, like me, comes from a small town and finds wild adventure and romance when she becomes a flight attendant. I wanted her to have three love interests be very different so I came up with a sweet veterinarian living in England, a hot-blooded hunk living in Italy, and added a likable Russian who could be more than a friend. Who would you chose for Nora?

Book Sample
Nora checked into her budget lodgings at the Hotel Grande in Rome. It was small but clean. “Grande” seemed a misrepresentation. She had some time before lunch, so she decided on a stroll. Familiarizing herself with the area would be a great start; she would keep an eye out for a café where she could get something to eat. The dark-haired girl at the tiny lobby desk handed Nora a map, circled a few sites, and gave her directions to the bus stop in English. Nora smiled and thanked her and was off to explore. She felt a little jittery and nervous. She was actually in Italy–all by herself! She was making extraordinary things happen in her life. She was letting go of her safety net, putting herself out there, and embracing the unknown. She knew she was going to be just fine.

Nora, lost in her thoughts, realized she had not arrived at her piazza destination. She unfolded her map and began to retrace her steps. The narrowing residential alley didn’t seem right. As she turned to go back, she was suddenly knocked backwards; she toppled to the ground. She felt a yank at her elbow as her bag was pulled free from her arm. The thief dashed away before she even saw him. She twisted around, yelling, “Heeeeyyyy!” only to see the pumping legs of his form retreating down the alley. She shook with panic as she thought, Oh no, my wallet’s in there…my money and ID!

Nora blinked back frustrated tears several times. Then she saw a brawny man reach out and knock her assailant to the ground with one swift punch to his face. He reached down and pulled the guy up by the front of his hooded sweatshirt, twisting his fist for a thorough hold before he sent a second blow to his chin, dropping the assailant to his knees. The guy dropped Nora’s bag and mumbled something in Italian. The larger man shoved the attacker away, pointing and warning him in menacing Italian. The hooded guy scrambled up into a staggering run and was soon back at top speed, dashing from sight down another alleyway.

Nora sat on the ground, stunned by what had just happened. Her rescuer scooped up her bag and jogged over to her. He squatted at her side and questioned her in Italian; she had no idea what he’d asked her. Despite her ordeal, all she could focus on was how attractive the man was. She stared at his face. His dark wavy hair was combed back and curled around his ears, resting just above his broad shoulders. His thick eyebrows framed hooded, dark eyes. His face was broad with generous lips… Oh, his lips.

Nora snapped herself out of it. “Oh! Oh, thank you so much.” She shook her head and tried to focus on standing up. She winced in pain and grabbed her hip, which had taken the brunt of her fall. Nora could tell there’d be a huge bruise.

His large hand clasped Nora’s elbow to help steady her as she stood.

“Are you okay, miss?” he said in English, his voice was deep, smooth, and heavily accented.

“Yes, thank you. Just bruised, I think.” She accepted her bag with a sheepish smile. She felt herself blush when he bent down to retrieve her map and hand it to her. She took that opportunity to notice the muscles that rippled under his T-shirt when he reached down. He was dressed in sweatpants and sneakers. Perhaps heading out for a run, she thought. He looked to be in amazing shape.

“Do you need help finding your way? You are American?”

“Yes, I’m from America. I’m lost. I got turned around somehow. I’m Nora, by the way.” She held out her hand. “Nora Clark. I can’t thank you enough.”

“Hello, Nora. It’s a pleasure to meet you.” He clasped her hand. His hand felt like a warm magnet pulling her to him ever so slightly. “I am sorry we met under these circumstances. This is a nice neighborhood, but these young kids will find every opportunity to prey on tourists. Please excuse the violence. I’d like to think a good scare, without police involvement, might make him think twice next time. His mama will want to know why his face is so bruised. You should carry your bag like this…” He let go of her hand and lifted the bag’s long strap over her head. “Across your body.” As he murmured the word “body,” his heavy-lidded eyes slowly shifted down to gaze at her body.

Nora’s voice chirped. “Could I buy you a cup of coffee? It’s the least I can do…” She held out her hands, palms up.

“Antonio,” she repeated. Maybe her heightened senses lingered after the attack, but she was hyperaware of his all-consuming presence, and her pulse raced.

Antonio stepped back, dragging the side of his index finger over his bottom lip, and gave her a considering look. He said, “How about dinner? And I will be taking you, to make up for what has happened to you in my city.”

Nora’s eyes widened in surprise. “You don’t have to do that. I mean, it’s really nice of you. I’d love to. I’m staying at Hotel Grande.”

“Then I will pick you up at eight o’clock at your hotel. May I walk with you to the end of this street?”

Antonio directed Nora back to the corner where she had become turned around. They chatted about the city until they reached the corner, and Nora headed back in her original direction. Antonio tucked in ear buds and slipped an iPod into his pocket before he jogged away in the other direction. She could not resist looking back over her shoulder at him. She watched his broad shoulders sway as his body moved in rhythm. She noticed his torso narrowed at his waist and his butt appeared tight, though his pants were somewhat baggy. As he retreated he did not look back, so Nora allowed her eyes to linger.

Wow! What just happened! Here I am, thinking I’m so adventurous, and I’m knocked on my ass and my bag is stolen–only to be returned to me by a gorgeous man! And I dared to ask him out for coffee! Which will now be dinner… Oh my! Nora swallowed hard. She needed to call Bree and dug around her bag for her cell phone.