You are here: Home / Fiction / Mystery/Suspense / Flight of the Tarantula Hawk by Michael Allan Scott 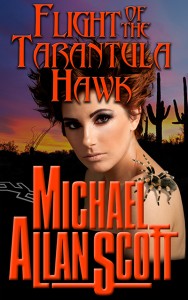 TAILSPIN INTO MURDER – Recovering from a psychotic break, Realtor Carla Simon has her first showing in nearly eighteen months. When Carla’s buyer pins her against the wall, it turns out to be the last house she’ll ever show.
Lance Underphal attempts to bury his psychic curse alongside his troubled past. But when cryptic nightmares begin to plague him, Lance knows his struggles with the supernatural are far from over.

Homicide Detective Frank Salmon drags the reluctant psychic into the investigation. Underphal clues him in—this psycho is just getting started.

Salmon’s manhunt ratchets up as Underphal’s predictions come to pass. A wild ride full of twists and turns, from a Goth-fest gone wrong to a shiny new morgue, they grapple with demons real and imagined.

As his dead wife Sonja whispers words of warning, Lance comes face to face with the murderer fresh from a kill. It’s only then he discovers it’s the murderer who’s stalking him. Lance wrestles with grim choices: Give up the chase and abandon his friends, or immerse himself in the killer’s dark past and risk annihilation. Lance’s only shot at redemption—face the horror and reveal its source.

Targeted Age Group:: 21 and up

What Inspired You to Write Your Book?
Flight of the Tarantula Hawk is the second of the Lance Underphal Mystery series. I was inspired to take the characters to the next level, adding new characters to enhance the story. I explored a sub-theme beyond merely murder and psychic phenomena – the evils inherent in traditional psychiatry. Extensive research proved to be a eye-opener, leading me down unanticipated trails – an enlightening experience, to be sure.

How Did You Come up With Your Characters?
The characters for Flight of the Tarantula Hawk were a natural progression from the first book in the Lance Underphal Mystery series, Dark Side of Sunset Pointe. A couple characters were more fully developed, and a couple new characters added on the protagonist side. And of course, a whole new cast of victims and criminals pop into view – always fun.

Midday, and a crisp scent of fall fills the balmy air of late October. Sun-baked terrain has cooled, well below oven operating temperatures for several days in a row—the first time in nearly six months. Phoenix’s last Indian summer is finally laid to rest. Snowbirds and other migratory fowl flock to town, clogging the freeways and surface streets, swelling the resort hotels, RV parks, and the wallets of local merchants. A veritable desert paradise . . . almost, except for that fleshy, white underbelly that never sees the sun.
Crouched in the upscale suburb of Paradise Valley, a four-bedroom, two-and-a-half-bath contemporary ranch style sits vacant—its foyer littered with MLS flyers and Realtors’ business cards while dust bunnies breed in its corners. At the street, the “For Sale” sign declares it’s “Bank Owned”—a sign of hard times, blighting nearly fifty thousand homes in the Phoenix area alone.
Carla Simon fumbles with the lockbox’s key to open the empty house. Her hollow cheeks match the hunted look in her soft brown eyes. Nervously waiting in the foyer for her two o’clock showing, she smooths the front of her skirt with sweaty palms. It’s been a long time since she’s shown property—too long.
Carla waves vigorously, her greeting overly effusive as her prospect trudges up the walk. “Any trouble finding it?” she asks.
Her prospect seems distracted, answering, “No . . . no problem.”
Carla starts in, leading the way. “You’ll notice the hardwood flooring throughout the main living areas.”
They cross through the foyer.
As they enter the living room, her prospect suddenly grabs Carla from behind and pushes her face-first into the wall.
“OhMyGod! What are you doing!?!” Stunned, Carla struggles to make sense of it. This can’t be happening!
Her prospect spins Carla around, pinning her to the wall with a forearm. She stares at her attacker’s placid features in disbelief, frozen with terror. Her attacker’s wide eyes bore through her like red-hot lasers. Confusion scrambles her thoughts as she watches a hand rise over her head. Too late, Carla sees the gleam of a large hypodermic needle as it thrusts deep into her neck, penetrating the carotid artery. Carla’s eyes roll with panic as the stab of the big-bore needle pierces her throat, burning fluid swelling her neck.
Racing to the brain like a predator possessed, the poison’s fiery tendrils sizzle neurons, frying and then extinguishing cranial, optic and facial nerves. Burning numbness spreads, robbing Carla of all muscular control. Her eyelids droop as facial muscles go slack. Vision doubling, then blurring, then dark, the last image burned into the back of her fading retinas is her attacker’s retreat. Carla’s shrieks echo in empty rooms, soon to be stillborn in her useless larynx as paralysis sets in.
How is it possible? The ultimate betrayal. Her life had just started to turn around after all the hard work and struggle to regain her family, her career, her sanity. She needs to ask why, but deadened lips refuse to move.
Her dry mouth hangs open uselessly as her last breaths flutter from paralyzed lungs. Maybe she wasn’t meant to be happy. But why now? And why like this? Bladder and bowels let loose as her arms and legs go limp. She slides down the wall to slump into a spreading puddle of her own urine. Slowly tilting over, her torso topples to the floor. Her head, bouncing off the solid wood floor like a ripe melon.
No, No, NO!!!
Fully conscious while trapped in a cooling carcass, Carla screams hysterically to no avail; only silence and darkness ensue.

Pale moonlight floods vacant rooms, streaming through bare windows. The consciousness that was Carla Simon watches cold blue-white light creep across the hardwood floor to climb bare walls, exposing a swollen flyblown corpse. She’s lost all track of time. How many nights has it been? She tries to remember . . . where she is, how she got there. Hollow spots, holes, nothing there when she’s sure there must be. If only she could remember. Dr. Manson said there would be some confusion and short-term memory loss, common side effects of electroconvulsive therapy.
Melancholy haunts her as thoughts flit from question to question, too many loose ends. Did I lock the car? Did Howard make the house payment? Did Jimmy get his dinner?

A fine layer of dust coats the smooth planking, absorbing the lumber’s lustrous sheen. Dust motes gleam like tiny stars in the glowing blanket of moonlight that hugs the floor. Fragments whirl in Carla’s thoughts, fluttering like wounded birds. A to-do list half done, the white sheen of a prom dress, a plastic wristband from the hospital—shards of a shattered past, nothing left but scraps.
It’s so still she can almost hear the thrum of the cosmos, its pulse trembling at the edge of perception. The quiet house seems on the verge of telling her something, some deep revelation, a most intimate secret.
Something’s not quite right, but she dare not think about it. She’s certain that somehow it will miraculously all come to her and she’ll be okay.

Moonlight sifts through dust-streaked glass, exposing a void, an emptiness, as Carla absently reflects on her condition. But she’s been done with all her treatment for months now. Dr. Manson promised her it would be okay.
Cold light cuts through dead air with scalpel-like precision, illuminating tiny imperfections floating aimlessly in space. Yes, it will all be okay. Like gasping awake from a nightmare or coming to from a deep coma or a near-death experience—a grand mal seizure, like after an ECT treatment. Yet it has to be okay. How else could she still be seeing, hearing . . . thinking? It’s all just a bad dream, Carla’s sure she’ll wake up soon. Still, something’s not right. If only Dr. Manson had explained it to her, maybe then she’d understand. And she really needs to understand.

Sixty miles northwest of Phoenix, just outside Wickenburg, it’s an unusually bright night for early November, the blood moon waxing full above a rugged mesa. A stiff breeze whips up into a gusty blow, kicking up dust and rolling tumbleweeds across the open desert to pile against long stretches of rusted barbwire fencing. As a lone coyote’s howl dies off, the cold wind moans, a bone-chilling song, echoing through the dry creosote and down the rocky ravines.
Gritty gusts vibrate the metal sheeting of an aging doublewide. Anchored against the elements, the weather-beaten trailer clings to a five-acre plot of raw desert. A ten-year-old Jeep Grand Cherokee is haphazardly parked nearby. The darkened trailer and old Jeep lie at the end of a narrow dirt track, the only evidence of civilization for miles.
And that’s fine with me. Just the way I like it. I’m snoring away in my new La-Z-Boy recliner, a half-empty longneck Bud sweating on the side table. A new fifty-two-inch flatscreen flashes digital images—my new surround-sound system, whispering the satellite TV’s endless monologue.
Dreaming, I catch my breath as a new reality unfolds:
A bright summer day, clear and hot. A large jet-black wasp appears overhead before I hear the hum of its Halloween-orange wings. A tarantula hawk headed straight for me. Flashes of raw panic. She’s enormous, big enough to carry me away. She lands in front of me, extending her hooked claws, wings flicking in anticipation. I rear back on hairy hind legs, baring my fangs and poking segmented forelegs at her in a valiant attempt to ward her off. She lunges, grappling with wicked claws, pulling me off balance and turning me over in one lightning-quick move. I flail wildly, arching my back, legs in the air, abdomen exposed and vulnerable. Holding fast, she thrusts her long black stinger deep into my belly, releasing her paralyzing venom. The shock-inducing sting slowly numbs me to the core as I silently scream from within its high-voltage spell. Her vile excretion robs me of all muscular control, leaving me to crackle in a hellish limbo. I can’t quite feel her dragging me away, but I fear the worst is yet to come.
A ringing in my head distracts me, growing louder, more insistent as the nightmare fades.
My cell phone’s obnoxious chirp drags me to semiconsciousness. I flail in my recliner, disoriented, trying to get my bearings. Grabbing my cell, I squint at the caller ID but can’t focus, my head spinning, drowning in dizziness.
The loud chirping stops and suddenly, it’s quiet. All that’s left is the ringing in my ears. As the ringing dies down, the dizziness fades. I decompress as the wind’s inhuman wail seeps through cracks in old weather stripping, competing with the TV’s mindless drone.
Thinking it through, it turns out the nightmare was more than just another bad dream. I know, having had more than my share. And “the worst is yet to come,” rings prophetic.

Buy Flight of the Tarantula Hawk On Amazon