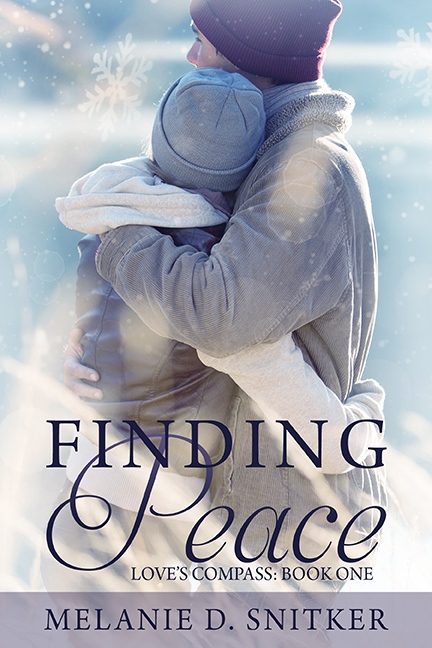 Police Officer Tuck Chandler is good at his job. He’s also good at holding women at arm’s length. Jilted by his fiancée for his dedication to his job, he’s not about to open himself up to hurt like that again.

Laurie Blake is a struggling photographer. After growing up in a wealthy family, she’s determined to make it on her own, even if it means doing it the hard way.

When Tuck is assigned to a puzzling burglary involving Laurie’s fledgling photography business, he goes into it with his usual perseverance. He wants to help her – if she’ll let him. As the case unfolds and the mystery deepens, another question arises.

Will the past get in the way of their future?

What Inspired You to Write Your Book?
I originally knew that I wanted to create a series of romance novels. I thought of the series name Love’s Compass early on and each of my titles have grown from that name. For Finding Peace, I wanted to create a story that would show how God can use others to help us achieve a feeling of peace when we’re faced with a difficult, or troubling, situation. As the story line of this book developed, it became a mystery of sorts as well.

How Did You Come up With Your Characters?
Tuck was a lot of fun to come up with. I knew I wanted a guy who was in a position where he could come riding in to help like a knight in shining armor. I chose to make him a police officer and it fit his personality perfectly. He’s dedicated and good at his job, but not full of himself. Definitely a good combination!

As for Laurie, I originally wrote her one way and then went back to change some of her personality. I wanted her to be a strong character who originally wanted to rely on herself. She eventually has to learn that, even if she doesn’t like it, sometimes God places people in our lives to help us through a situation and it’s okay to lean on them for support.

Book Sample
Laurie Blake fumbled to fasten the buttons on her jacket. When she was finished, she plunged her stiff hands into the welcome warmth of the pockets. It was January in north Texas and cold weather was to be expected. But these exceptionally low temperatures almost made her want to dig out her gloves. Almost.
Each breath turned into a puff of fog that preceded her down the street. She chose her steps carefully to avoid the uneven sections of pavement.
Walking the two buildings between Daisy Belle’s Diner and the apartment above her photography studio, she was glad she chose a small bowl of vegetable beef soup for dinner. It would help keep her warm until she got home.
The evening sky bore hints of orange as the sun readied for bed. Perfect timing. She hated to be out after dark.
The neighborhood wasn’t in the best part of town. And that was an understatement. Most of the buildings were in dire need of a fresh coat of paint and the storefront for Capturing the Moment Photography was no exception. She was thankful that at least her building didn’t sport any of the paint tags many of the others did.
Her eyes flitted to her dusty-looking Honda Accord before turning towards the door of her place. Something snagged her attention and her head whipped back around, eyes quickly honing in on the trunk. It wasn’t latched. Thinking little of it, she went to shut it completely and that’s when she noticed that the passenger side window had been broken.
A groan came from her throat as she stood and stared at the damage. Tears gathered in her eyes.
This was fantastic. Just what she needed – to pay for repairs to her car. Because there was nothing else to use her limited funds on.
Shoulders slumped, Laurie unlocked the door to her studio, turned the lights on, and stepped inside. She pulled a cheap cell phone out of her pocket and dialed the police station. After reporting the damage, she was told to expect an officer to stop by.
Many of the portraits on the walls of her studio smiled at her. However, not even the photo of the cherub-faced baby sitting in a flower pot could lighten her mood.
By the time a truck pulled up in front of her place almost an hour later, the tears had disappeared. She stopped her swift pacing and looked past the reflection of herself in the window as an exceptionally tall man got out of a black truck.
She stepped out into the cold air, leaving her jacket hanging on a chair inside. Arms crossed in front of her, she watched as the man approached her. He wore the two-toned blue Kitner Police Department uniform which included a heavy coat. At over six feet tall, he was the definition of confidence.
He gave her a nod. “Hello, Ma’am. I was told that a car had been broken into. Was it you who made that call?”
“Yes, it was.”
He looked like he was expecting her to say something else. She raised an eyebrow at him.
The officer cleared his throat and reached for a small notebook in one of his coat pockets. He pulled it out along with a pen and flipped open to a blank page.
“I’m Officer Chandler. Can I have your name?”
“Laurie Blake.”
“Is it your car that has been damaged?”
“Yes.”
She gave him her contact information and answered a few other questions before he motioned to the car.
“Laurie, I would like you to show me the damage and make a list of anything that might be missing from your car.”
“Nothing was stolen.”
“You already went through everything?” His brown eyes looked surprised and she realized that they were the exact same shade as the close-cropped hair on his head.
“I don’t keep anything in my car. I know what part of town I live in.”
Officer Chandler’s eyes went to her crossed arms. She had been rubbing them to keep warm and stopped immediately under his gaze.
“You should go inside and get a coat. This could take a few minutes.”

Laurie’s arms dropped to her sides and she pierced Kentucky with a glare. She turned on a heel and went inside the studio behind her. He followed at a distance and stopped just inside.
He watched her shrug on a dark green jacket. Hair hung to the middle of her back, the ringlets tangled together in a mess of copper red.
He stared at her eyes. They were so green, they reminded him of jade.
“My jacket’s on. Let’s go.”
He moved out of her way as her shoulder brushed his chest. He raised an eyebrow. If she was this frigid with the guy who was here to help, then it was a good thing the person who broke into her car was long gone. Kentucky might have been called in to investigate a homicide instead.
Black boots that looked tiny compared to his own carried her around the car to the passenger side. She gestured to the broken window and buried her hands in her pockets.
Kentucky reached for a small camera in his coat and took a few photos before pulling on the handle. The car door yielded with a creak and he leaned inside.
His gaze swept over the faded seat covers, the stained floorboards, and landed on the dash.
“That’s odd, the stereo is still here. It’s usually the first thing they take.” He stood up again. Laurie was watching him. “If you had nothing stashed in the car, what was the point?”
She shrugged. “They checked the trunk, too. It’s an old car. Probably wasn’t worth their time.”
“Maybe.” He examined the trunk and made a few more notes. “At this point, all you can do is make a claim with your insurance company to get the window repaired.”
At his words, a look of defeat crossed her face.
“What is it?”
“I have liability only.”
He gave her a nod. He remembered when Capturing the Moments Photography had opened up about six months ago. He had even commented to his partner about how the area of town was an unusual place for a business like that. Looking at Laurie’s car, he assumed she was here because it was all she could afford.
He rubbed the back of his neck with one hand. “We will investigate this. If we can find the guy who did it, we’ll let you know. I’m sorry there’s not much else I can do.”
The light from the studio reflected in her eyes. The frown on her face softened as she kicked one of the car’s tires with the toe of a boot.
His eyes were drawn to her mouth as she worried her lower lip with her teeth.
“Do you have any trash bags?”
Her brows came together. “What?”
“If you have a trash bag and some packing tape, I’ll help you cover up that window.”
Her pretty eyes opened wide and she blinked at him as if she were seeing him for the first time.
“Um. Yeah. I do.”
Without another word, she disappeared into her studio. As he waited for her to return, Kentucky wondered about Laurie Blake. Her emotions seemed measured and she certainly was a woman of few words. But he had seen vulnerability – even if it was only for a moment.
She came back with the materials he needed. Together, they sealed off the broken window. When they were finished, he nodded towards her place. “It’s getting colder out here and you have to be half frozen. You should go in for the night. I’ll file all of this first thing in the morning.”
He half expected her to argue with him. Instead, she took the tape back from him and jabbed a thumb at her car. “Thanks for the help.”
“You’re welcome.” He withdrew a card from his wallet and handed it to her. “If you have any questions, please don’t hesitate to call me.”
Their fingers brushed as she plucked the card from his hand. The warmth he felt at the touch surprised him.
Without looking at the card, she slipped it into her jacket pocket. She walked to the door and turned slightly towards him again.
The light lit her face and he admired the smattering of freckles across her nose. “I’m sorry this happened to you.”
She shrugged her shoulders, copper curls falling forward to frame her delicate face. “It is what it is.”