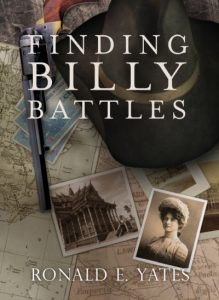 A link to the past no one could ever imagine.
When a great-grandson inherits two aging trunks and a stack of meticulously detailed journals penned by his great-grandfather, he sets out to fulfill his great-grandfather’s last request: to tell the story of an incredible life replete with adventure, violence, and tragedy. The great-grandfather’s name is Billy Battles–a man often trapped and overwhelmed by circumstances beyond his control.
For much of his 100-year-long life Billy is a man missing and largely unknown to his descendants. His great-grandson is about to change that. As he works his way through the aging journals and the other possessions he finds in the battered trunks he uncovers the truth about his mysterious great-grandfather–a man whose deeds and misdeeds propelled him on an extraordinary and perilous journey from the untamed American West to the inscrutable Far East, Latin America and Europe.
But most of all he learns that in finding Billy Battles he has also found a long lost and astonishing link to the past.

What Inspired You to Write Your Book?
I grew up in Kansas and I was always fascinated by what life was like there in the 19th Century when the state was still quite wild. At the same time, I spent a lot of time in the Far East as a foreign correspondent and I was equally intrigued by what life must have been like in the 19th Century colonial period in places like French Indochina, The Philippines, Malaysia, Singapore, Hong Kong, etc. Then one day I got the idea to blend the two using a character from 19th Century Kansas who goes to the Far East in search of himself.

How Did You Come up With Your Characters?
I call my work "Faction," because it is both fact and fiction. Some of the events in the book–especially those dealing with real people, did happen. Was my character directly involved in them? No. However, members of my family were native Kansans and some of the experiences I write about did happen. I also used many of the expressions and adages I heard my great-grandparents, grand-parents, uncles, aunts, cousins, and even my parents use when I was growing up in Kansas. I also have woven some of my experiences covering war and revolution in Asia and Latin America into the story line also.