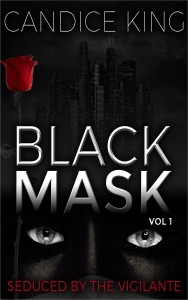 About the Book
There is a dangerous line between duty and desire.

Brilliant criminal analyst Catherine Farrows is the daughter of a seasoned police officer whom she saw burn out from the corruption and misery his job forced him to witness. She tried to leave her job, moving across country to Kingston, New York to settle into a quiet hiatus. When she meets friendly, sensual Tom, she delights in a new relationship with someone who truly seems to understand her.

But Tom has secret upon secret, and as Catherine soon learns, some of them are deadly. He is Thomas Ambrose, exiled scion of a monstrously corrupt and wealthy family, and his wealth and past aren’t all that he is hiding.

When the secret society that the child murderers belonged to catches wind of Catherine’s involvement, she finds herself in danger, and must rely on both men she desires to protect her. But are Thomas Ambrose and the Black Mask Killer really two different men? And if they are not, can she cope with the repercussions of giving her heart to a man who kills for justice?