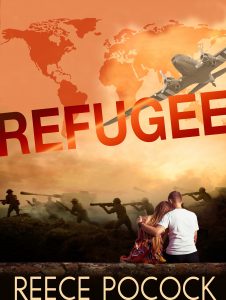 About Refugee by Reece Pocock

Reece Pocock has written an authoritative and intimate story of two families brought together by war and peace; in the process, he creates a fine study of how ordinary people are swept along by political and military events over which they have no control but which continue to colour their daily lives, said reviewer, Boris of Adelaide.

In North Africa in the 1940s, two men – Bill, an Australian and Rolf, a German – confront each other in a one-to-one fight in the vicious battles around Tobruk. Both are forever scared physically and mentally. Later, when Rolf is fighting in Italy, he learns of the Dresden fire bombing, deserts and returns home to find his family dead or dying. Rolf flees Germany and takes the identity of a dead companion, winding up in a displaced persons camp in France, from where he eventually migrates to Australia. The Australians meanwhile are withdrawn from North Africa and fight in the Pacific. In Papua-New Guinea, Bill is exposed to the horrors of jungle warfare and is invalided out of the army.

Five years after the War, Bill and Rolf meet each other by chance in Australia without knowing who the other is, and strike up a working relationship. Some of the locals resent the arrival of German migrants and Rolf is the subject of abuse and violence. When Rolf and Bill’s sister Elaine fall in love, family resistance is strengthened. Rolf eventually realises that it was Bill who wounded him in North Africa and must decide whether to forgive and forget or whether to seek revenge.

Pocock evokes powerful imagery of the viciousness of war in both the desert and the jungle as well as convincingly portraying how men respond under enormous stress.