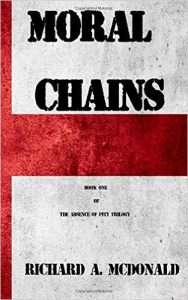 About Moral Chains by Richard A. McDonald

May 24th, 1940 – World War 2
Hundreds of thousands of allied troops are fleeing Northern France. Vastly superior German forces sweep aside the British Expeditionary Force on all fronts. Two thousand badly armed and heavily outnumbered men are ordered by Winston Churchill to fight to the death. They must die so that others may live, the bloody Battle of Calais has begun. Two very different young men begin their fight to survive. One chooses to be a gentleman, one to become an animal.
The first in a Trilogy of Novels, all available now, the start of the special relationship between two great countries, not for snowflakes, hailstones maybe.
Eleven Reviews on Amazon – 4.8 Stars