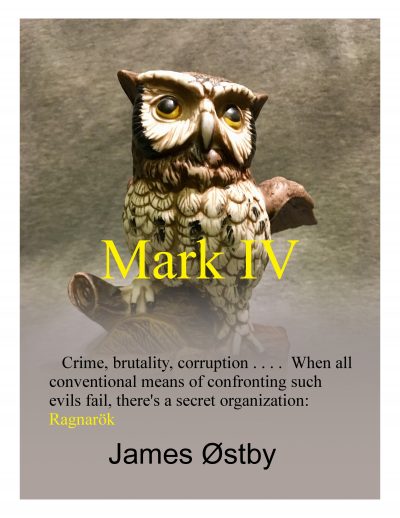 About Mark IV by James Ostby

In our world of increasing complexity and the resultant human and physical constraints–overpopulation, global warming, rampant stupidity, unchecked evil, corruption, scientific advances used for ill–what is to be done? Are even the best governments incapable of maintaining order? Is the future of humankind at stake?
How many of us have wondered what we would do if we had some kind of world dictatorial power or other absolute influence? Many would find that conjecture to be overwhelming. Yet what if we limited our scope to, say, evil and corruption? The next barrier to fighting such iniquity would be the realization that too often world governments are inept when it comes to such endeavors. Inadequate due to legal, religious, intellectual, political and traditional moral strictures.
In view of that, what then if a choice had to be made between the world falling into chaos, and one in which there is secular salvation, but only through efforts that lie outside the normal bounds of the best of civilizations? There are immeasurable individuals and groups outside the laws who are vile and malevolent; why not a last-resort counterpart–unfettered by normal laws; practical and down-to-earth–dedicated to good, but who find it necessary to resort to harsh measures? Those who realize that we have come to a point in history where we must fight fire with fire.
Enter Ragnarök, a secret organization that inflicts punishments in the forms of Mark I, II, III, IV, or worse, Mark V (death).