You are here: Home / Fiction / Fatal Destiny by David DeLee 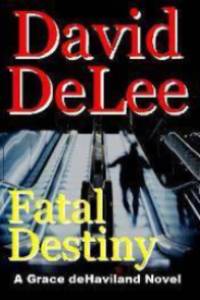 For bounty hunter Grace deHaviland, the job seemed simple. Track down Barry Keegan, a white collar defendant in a corporate embezzlement scandal who’d jumped bail.How hard could that be?
But the case turns deadly when Keegan’s co-defendant ends up murdered, and Grace’s best friend, sheriff’s deputy Suzie Jensen, is nearly killed.
Drawn into a web of deception involving stolen mob money, old scores, and ruthless hit men, Grace must track down the elusive Keegan–a man who is more dangerous than anyone could have guessed–while she tries to protect his wife and son from a past they thought was dead and buried.

Author Bio:
David DeLee is a native New Yorker. He holds a Master’s Degree in Criminal Justice, and is a former licensed Private Investigator. He is the author of the Grace deHaviland, bounty hunter series. His previous short stories have appeared in Daw’s Cosmic Cocktails, in three consecutive volumes of Pocket Books, Strange New Worlds, and the Mystery Writers of America anthology, The Rich and the Dead, released in 2011. David is an active member of the Mystery Writers of America and the International Thriller Writers Association. He currently lives in New Hampshire with his family where he’s at work on a novel featuring Columbus, Ohio-based bounty hunter, Grace deHaviland.