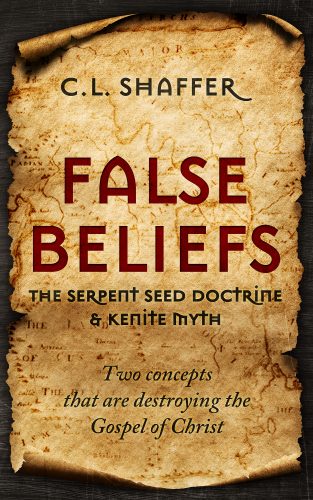 This book is meant for those being delivered from these teachings and those ministering to loved ones still in this teaching. Those interested in theological topics may also find the information helpful.

What Inspired You to Write Your Book?
I saw a need to combat these teachings through factual biblical information. In this work, I point out how supporters of these ideas misuse the Bible and other resources such as Strong's Concordance to pull people into their falsehoods. My hope is that with the work of the Holy Spirit, my efforts will help liberate those caught in these teachings.

Supporters certainly capitalize on this fact. They take this sliver of truth and lead people into assuming that everything else the doctrine espouses is true. However, if you were someone who truly believed that the text actually contained the word apple, and you have gone on to believe in the Serpent Seed Doctrine, then the question you should be asking yourself is, “If I was deceived once, what makes me think I am not being deceived again?” The fact that the apple thing got past you is an indication that you were not even doing the simple step of reading the text for yourself. Instead, you were taking another person’s word for it. What else are you not reading or are just taking for granted as the truth?

Those who are not dogmatically taught that it was an apple in the Genesis story are usually not persuaded by the Serpent Seed Doctrine. Because supporters are so focused on arguing against the view that it was an apple that Adam and Eve ate, they don’t recognize (or perhaps even consider) that most adults understand that there is an underlying meaning being relayed in Genesis other than a woman just biting into a piece of fruit. This author is not sure who, over the age of eight, would not recognize this. Of course, there is meaning behind the symbolism, but it is not sex. It is disobedience. Due to this, the apple argument becomes irrelevant for most.

This narrow view that supporters have of non-supporters causes them to believe that their perspective on the text is much more sophisticated and mature. However, this author contends that the supporter’s view is not at all sophisticated or more mature. One must believe that Satan had and has genitalia and sperm, and that “he” was willing to procreate with Eve, even though it is obvious from the text that Satan despised Adam and Eve due to him tempting them in the first place. This view of angels in general is not advanced at all but rather earthly and pubescent.

This author does agree with one aspect of the supporter’s viewpoint. As previously mentioned, sensuality is present in the symbolism of the text, and it is there for a reason. Sin is sensual. Sin feels good. One of the main reasons why we sin in the first place is because there is a component of it that makes us feel good, if only for a time. Supporters focus on the sensuality that is present in the story and go too far by thinking the text is simply about the physical act of earthly sex. But sin, no matter what it is, usually has a sensual aspect to it. Ask a bank robber why he robs banks. No doubt, he will tell you that it was for the money, but beneath this motivation is the thrill he gets from it. The act makes him feel powerful and perhaps manlier. All of these are very sensual notions, and this is just from robbing a bank. Imagine the allure of wanting to be as a god.

As a side note, these types of discussions are meant for a mature audience. When you were younger, this incident recorded in Genesis was more than likely explained to you in terms of the simple actions and facts that happened within the story. The deeper meaning, which was concerning disobedience, not sex, would come later as you matured and could recognize the story’s importance as it related to the Bible’s theme of sin and salvation.