You are here: Home / Fiction / Fantasy / Fall From Grace by J. Edward Ritchie 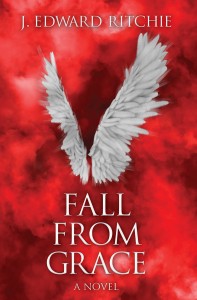 Heaven: a paradise of all that is pure in Creation. Led by brothers Michael and Satanail, the Angelic Host is a testament to cosmic harmony and love. But when an unprecedented revelation threatens to uproot their peace, a schism splits the Host’s loyalties. Every angel has to make a choice: faith or freedom. Good or evil.

War consumes Heaven in the first and most destructive loss of life that Creation will ever know. As brother turns on brother, the fate of Heaven and Earth rests in the hands of the Creator’s chosen son, Michael. How far will he go, what will he sacrifice in the name of their Father, to protect his family?

Witness the tragic downfall of a civilization told from both sides of a bloody rebellion. More than myth, more than legend, Heaven’s war will forever stand as a harrowing warning that even the purest of souls can fall from grace.

What Inspired You to Write Your Book?
I’ve always gravitated towards large scale war epics, in both the fantasy and historical genres. There is an undeniable allure and mystery to angels that spans multiple religions and mythologies. In my mind, I never saw them as babies playing harps in the clouds; I saw them as warriors. The original badasses of Creation. Superheroes. The idea of a war for Heaven, for an entire world, was conflict on a scale that I had never seen before. Despite scouring every source I could find, there was almost no substantial details about how the war went down.

What would cause so many enlightened beings to doom their bodies and souls? Rebellion, civil war, Michael versus Satan…I had to tell this story. Their story.

How Did You Come up With Your Characters?
I knew that I had to make Heaven and the angels relatable to the human condition. I chose a dual perspective point of view for the narrative, each chapter showing Michael and Satan’s opposing perspectives. The backdrop was a bloody, bold, and uncompromising look at warfare corrupting the unity of a civilization, but it was really a story about family. Two brothers on the opposite sides of the first civil war. These two voices were battling in my head, each believing that they were the heroes of their own story.

That’s what storytelling is all about, isn’t it? Even in Heaven, life can be a muddy, screwed up mess with no clear division between good and evil. Heroes can make dire mistakes. Villains can have moments of benevolence. My characters became caught up in the same maelstrom of ambiguous morality that was at the core of the war.

Book Sample
Michael wove between the trees at a breakneck pace, racing behind the flames burning towards the heart of the rainforest. Smoke obscured his vision, and one feather, one muscle, aimed in the wrong direction would propel him into a trunk. Feeling the heat intensify, he flattened his wings and barreled through a wall of fire into the refugee camp.

It was a massacre.

The invasion targeted Thrones, snagging the healers with propelled nets then scooping them from the battle. All other angels were killed. Demons above bombed the area while those on the ground hacked down trees. The toppled trunks crushed whole areas of refugee tents. Wooden Raqian homes intertwined with the branches splintered upon impact, strengthening the fire. Rope bridges snapped and slashed across the hysterical mob.

The oldest trees awoke to fight back against Satan’s legions. Pronged branches slapped the demons down to the detritus, and tangles of roots dragged them underground.

“It’s Michael!” A refugee called out from the mob.

The refugees had no weapons or means of defense. With the canopy ablaze, they fled on foot but trampled over each other in a mad dash for safety. The forest floor was a craggy terrain of broken bodies.

A demon heard the refugee and hurled a spear at his chest. Michael was too far away to intercept it…but Raphael emerged from behind the fiery blockade and caught the spear. He led a force of Thrones into the battle, each drenched in lake water to ward off the heat.

“Get back!” Michael shouted. “They want the Thrones.”

“We will not cower.” The hearth of Raphael’s spirit had been reignited. He lifted a tree limb pinning a trio of angels and slung them over his shoulders. “Thrones, secure the injured. Leave no one behind!”

The Thrones began a systematic evacuation of the wounded that allowed Michael to focus on the healthy refugees. Through the smoke, he spotted a thin section of trees not yet burning.

“Angels, stay behind me and move west to the forest’s edge! Link hands and flap your wings to part the flames. Do not stop!”

Michael’s clear instructions quelled the panic. He positioned himself between the refugees and the main force of demons. The selfish marauders could not resist such a precious trophy, and luring them to him would give the refugees a chance to escape.

“Murderers! Release your prisoners and flee…or forfeit your lives to the Creator’s wrath.” Michael shed any restraint, mercy, or empathy.

“Lord Satan is our only Creator,” a demon replied. “And his wrath isn’t aimed at us.”

“Is it not my life you desire?”

Michael spread his arms and wings, the muscles sweating from flames licking down the remaining upright trees. He valued every soul, but the demons responsible for Raqia’s downfall gave up their chance for redemption with the slaughter of helpless innocents.

“COME AND CLAIM IT!”

Thousands of demons converged upon Michael, fighting through each other in a demented competition to spill his blood. With only fists and courage, he met them head-on in a display of heroism that would become an everlasting measure of valor in the annals of Creation.

Time slowed to a fluid crawl for Michael as his power, skill, and passion to protect the innocent sustained him in the typhoon of violence. A storm of blades carved into him from all sides, but he stood his ground in the eye of the hurricane.
Every neuron in Michael’s brain activated, firing synapses that made it seem as if the demons were moving through liquid. His punches connected unhindered and sent ripples through their skin. Streams of blood floated in the air like ribbons. His heartbeat was a gradual bell of thunder that tolled for each fallen foe, but he did not fight with Satan’s egomaniacal rage. Michael fought for others using the serenity of his blessed union with the Creator. He fought for the refugees, for the Host, for Heaven, and for the very future of goodness. He fought to restore the balance of Creation.

When the normal flow of time resumed in Michael’s mind, demons were piled fifty-deep around him in a corpse circle as broad as a small village. He was doused head-to-toe, glistening in the flames like a ruby champion of the Creator. The air still festered with demons, but they kept at a distance. Their courage (what passed for it) was tamed.

Buy Fall From Grace On Amazon