You are here: Home / Fiction / Romance / Fairy-Struck by Amy Sumida 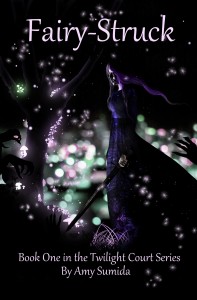 Would you like to hear a real fairy tale? A story about the war between us and them. A war which led to a truce and a truce which led to the creation of a secret society. There are councils you know nothing about, councils of fairies and of humans who write laws which govern us both. Laws you also know nothing about yet still you are held accountable to them. If you break these laws, the Wild Hunt of Fairy will come for you but don’t worry too much, it’s hard to break laws concerning that which you don’t believe in. Fairies tend to break the truce more than humans and that’s where I come in. I’m part of a military force who monitors the fey. When they cross the line, we extinguish their light… permanently. I’m Extinguisher Seren Sloane and I can tell you a real fairy’s tale, if you’re brave enough to listen.

What Inspired You to Write Your Book?
I wanted to write a fairy story based on the true fairy tales, the fairies of Old Ireland that were actually quite terrifying. But i wanted to make them real and make people feel that they could not only relate to them but be them.

How Did You Come up With Your Characters?
The characters arose as I wrote. That’s usually how my stories form, I just start writing and people appear.

Book Sample
The last man was obviously the leader. He stood a little in front of the group and held his chin at an angle which clearly broadcasted his disdain, either for us or his task. I wouldn’t be sure which it was until we talked to him. His hair began as bright, platinum blonde at the roots, a color so light as to almost be colorless. Then it slowly darkened, shifting through golden tones like a lion’s mane, warming deliciously to caramel and then to chocolate until it hardened into onyx at the tips. Those stark strands shifted like wet ink over the shine of his armor.
Within that maddening mane was a majestic face ruled by startling silver eyes, made even more intense by a thin outline of black around the irises. Skin, pale as raw silk, covered a wealth of muscles but it wasn’t pale enough to conceal a thin, silvery, curling line which trailed over the top of one high cheekbone. With those artistic swirls, the mark looked more like decoration than defect and actually accented his eyes beautifully, making them seem to shine even brighter. Still, it was a scar, I was sure of it. One created by magic.
A scarred fairy, you didn’t see that often, most healed too quickly to leave scars but then this was the Wild Hunt and he wasn’t just a foot soldier. He stood with the bearing of a commander but against the backdrop of my overgrown yard with its waist-high grass, and our humble wood home, painted a sweet baby blue, he almost looked silly. At the very least, he looked extremely out of place.
“Extinguishers Ewan and Seren Sloane?” The scarred one asked in a deep voice as he casually laid a hand on the pommel of his sword.
“Yes,” my father spoke for us, his own sword laid back casually over his shoulder like it was a Louisville Slugger. “And you are?”
“Tiernan Shadowcall, Lord of the Wild Hunt,” he said tonelessly but then his wide shoulders tensed, muscles flexing enough to shift his silver breastplate, and his gaze shot to mine.
I blinked at the intensity in those strange eyes and a shiver of precognition coasted through me. The silver in his gaze seemed to warm, melt, and go liquid as a trailing tickle of fingers ghosted over my flesh. My eyelids twitched over images of his face above me, long fingers clenching in the grass beside my cheek. I inhaled sharply and determinedly pushed the vision away to focus on the present. Tiernan cocked his head and took a step towards me. I was about to move towards him as well when I realized how crazy that would be and stopped myself.
“How can we help you, Lord Hunter?” I said as I lifted my sword and made a lie of my welcoming words. I didn’t know what the vision meant, if it was a promise or a warning, an attack or… something else entirely. I couldn’t think about it right then so I let the questions go and focused on the job at hand.
Tiernan stopped moving and blinked rapidly as he frowned, shifting his gaze from my eyes to my sword. He took a step back and then his eyes fell on the black SUV behind me. Those silver orbs seemed to flash and then he began to smile.