You are here: Home / Bargains and Freebies / Bargain Books Under $3 / Extreme Liquidation by Gary Starta @scifiauthorGary 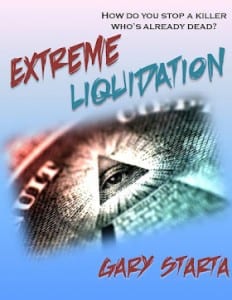 Black magic threatens humanity with Extreme Liquidation. The only thing preventing occultist Aleister Crowley from ascension is reincarnation. Trapped in human form again, he’s manipulating political events to bring about the End Times and achieve what he believes to be his true destiny. FBI Agent Caitlin Diggs has a secret gift that could stop him, but Crowley’s no ordinary enemy. He knows something she doesn’t, and tampers with her ability, twisting it to serve his own agenda. Will she uncover the truth in time to save all mankind?

How is Writing In Your Genre Different from Others?
I tend to mix in other genres. This book is as every bit science fiction as paranormal as mystery as it is romance.

What Advice Would You Give Aspiring Writers?
Persistence! Never give up writing if you love it!

Author Bio:
Gary Starta is a former journalist who studied English and Journalism at the University of Massachusetts in Amherst.

His love for science fiction compelled him to write his first novel What Are You Made Of? published in 2006. Inspired by Isaac Asimov, the science fiction novel focuses on intelligent artificial life and whether sentient androids should possess the same rights as humans. The androids in Starta’s novel are created as hybrids – part machine, part human – further blurring the line between human and machine. Starta foresees a near future where humans will be forced to decide if intelligent machinery is indeed a life form. Possibly, in this near future, some humans will possess computer enhancements to overcome disabilities becoming hybrids themselves. The line between biological life form and mechanical life form continues to be examined in 2010’s Gods of the Machines.

What Inspired You to Write Your Book?
A love for paranormal crime fiction. I was curious to see what would happen if a real person, Aleister Crowley, reputedly the world’s wickedest man came back from the dead. Could a reincarnated Crowley wreak havoc for selfish gains? Could FBI agents resist black magic and stop a supernatural force? Political chaos, fringe science and magic make for a supernatural thriller with top notch FBI Agent Caitlin Diggs as the protagonist.