You are here: Home / Bargains and Freebies / Bargain Books Under $3 / Everything a Rogue Desires by Dawn Brower 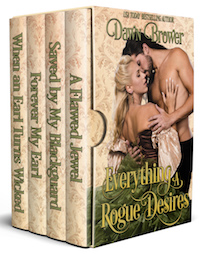 Bundled together for the first time! FOUR first in series books by DAWN BROWER

A Flawed Jewel: Pieretta boards a ship, unaware that Thor is waiting to kidnap her for revenge against her grandfather. Will love intervene, altering both their courses?

Saved by My Blackguard: Together Paul and Evelyn rely on each other to survive the raging storm, villainous pirates, and a little bit of culture shock. Can they get past each other’s differences and learn to trust each other and find love.

Forever My Earl: Hannah Knight dreams of a happy-ever-after in the arms of the man she loves, but war has kept them apart. Garrick, the Earl of Manchester returns home; however, love is the last thing on his mind. Can two lost souls find their way back to each other?

When an Earl Turns Wicked: Jonas Parker, the Earl of Harrington has no intention of ever marrying. He enjoys living unencumbered by the responsibility of a family and has been on his own since he was a young man. Nothing will alter the course he’s set for himself. Lady Marian Lindsay wants to be a physician and she’ll do whatever it takes to accomplish her goal, even coerce one of her father’s young compatriots into taking her to a house party. Propriety must be met at all costs because Jonas refuses to be wed at the end of Marian’s expedition…

What Inspired You to Write Your Book?
I wanted to introduce new readers to some of my historical romance series.

How Did You Come up With Your Characters?
There are four books in this anthology. The first one is the very first book I ever wrote, A Flawed Jewel. I wanted to bring together two unlikely people–a Southern bell and a pirate and see where it led. It was an interesting journey for me as a newbie writer and it had so many different drafts.

Book Sample
Pieretta looked up at him and saw a smirk forming at the corner of his mouth. One side was upturned in a lazy half smile. Her meager attempts at getting away were thwarted by the stupid dress Tully had carelessly left laying on the floor. Even if I managed to get away from him where would I go?  They were on a ship in the middle of the ocean. She resigned herself to being at this pirate’s mercy, at least for the time being. “Ah, I have found a fine jewel to add to my treasure.” He pulled her firmly into his tight embrace.  A musky smell tinged with a hint of sandalwood and chocolate filled her senses.  Delicious… “What?” Pieretta dumbly replied.  How am I going to survive when looking at him makes me brainless? “What is your name, girl?” Should I tell him my name? Why does it matter to him what it is? Pieretta didn’t know much about pirates, but the little she was aware of told her they didn’t care about the people they attacked. Her name shouldn’t matter to him. Still locked in his arms, Pieretta was forced to tilt her head back to stare up at him. The look in his eyes told her all she needed to know. It was best to just answer his questions and pray for mercy. With great reluctance, she told him her name. “Pia.” “Ah, Pia, you’re coming with me.” He yanked her toward the door.