You are here: Home / Non-fiction / Everyone Said I Should Write A Book by Jonathan White 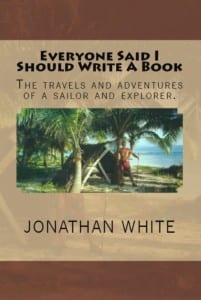 Stalked by jaguars in the jungle of Guatemala! Will they survive pirates off Costa Rica? How does he escape war in Kashmir?

“Jon’s stories are wonderful. I would liken them to Jack Kerouac’s, in that his stories want me to seek adventure, damn the danger!” wrote one reviewer.

Hanging out with Jim Morrison, surviving a huge tornado at sea, saving the life of a lone fisherman helpless in a storm… Whether you are a landlubber or sailor, an armchair adventurer or world traveler, you’ll understand why everyone said he should write a book…

How is Writing In Your Genre Different from Others?
True tales from a modern advernturer, not in chronological order…Readers say they feel they are there!

This, my first book was written at the request of friends and family for many years, hence the title! I really expected to sell maybe fifty copies total. But it gained traction on its own and has sold many times that since it was published in February 2012.
I enjoyed the writing experience, the words flowed into sentences, then paragraphs, then complete stories. I would find myself at four in the morning, quietly working on my laptop, while my wife slept through the night.
Using ship logs, old notes and emails, I re-lived the tales and adventures and apparently my writing style was embraced by people all over the world. I received emails from Australia, Norway, Argentina, even Afghanistan asking for a sequel. That is now available…

What Advice Would You Give Aspiring Writers?
Let it flow…continuously

Author Bio:
Cap’n Jon is an English sailor, adventurer, explorer and international entrepreneur. He has explored over thirty-five countries and was a professional sailor for several years.

He also has a love of vintage cars and amongst many others he has owned Bugatti, Frazer-Nash, Morgan and Bentley marques.

He has started and owned businesses in England, the U.S.A., Mexico, Afghanistan and New Zealand.

He is married to Joell, a published artist and musician, who has been his traveling partner for fifteen years.

What Inspired You to Write Your Book?
Everyone said I should write a book. Judging by the world-wide reception and sales, they were right…