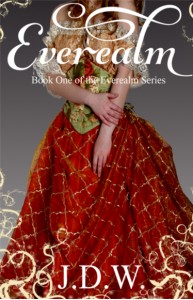 Breestlin cannot escape her destiny to become ruler of her father’s kingdom, but she never planned to become queen at twenty-three years of age. Upon the return of her first love, Rowan, Bree must quickly learn how to adapt to both her new responsibilities as a ruler and her inability to suppress her feelings for Rowan. To make matters more difficult, her outcast uncle, Silas, will stop at nothing to get what he desires, putting lives and the kingdom in danger. Bree must seek the assistance of the wizard, Dagan, who in a twist of fate discovers much more about his family (and himself) than he could ever imagine in this steamy love story, full of mystery and romance…

Danger awaits, as we journey through Everealm, the first book of the Everealm Series.

What Inspired You to Write Your Book?
I wish I could say that someone inspired or encouraged me, but I started the series for mostly selfish reasons. I wanted to prove to myself that I could do it. I actually started writing a novel while I was in high school and never finished it. Then over a decade later, I came across my binder with notes from the novel and I decided to take the plunge and do it! I changed up the storyline and characters, but I kept most of the same names of people and places that I had researched and collected many years ago. Music also helped me to develop the story and continues to play an important part in my writing.

How Did You Come up With Your Characters?
I am probably one of the few authors who do not base characters on people I know. I find that doing so limits what I can do with those characters without offending someone. I played Sims Medieval and surfed through Pinterest to get inspiration for some of the medieval/fantasy/magical clothing and scenery. My series allows me to create a huge variety of people and personalities. I get to play with dozens of different characters, some brave, some funny, some selfish or vindictive, some flirty and promiscuous. It’s amazing to be the director of such a colorful cast of characters! The stories I can tell are never-ending!

Book Sample
Light? It can’t possibly be daylight already. Ugh. Bree grumbled, sitting up in her bed, with her eyes still shut. She would probably have to pry them open. Her head was reeling, and it felt like the room was spinning. Is it really spinning? She opened one eye, just to be sure. Her nightgown felt damp from sweat. Just another remnant of indulging in too much wine the night before.

Bree finally decided to open her eyes, looking down on the bed, fearing that if she looked up any higher she would catch the rays of sunlight coming in through the window and falling directly on her. Who left the damn drapes open? She drug herself over to the edge of the bed with her eyes barely open and swung her legs over the side. The stone floor was cool on her feet, a great contrast to the hot and sweaty bed behind her. She closed her eyes and took a few breaths, enjoying the fact that the room had stopped spinning.

Bree reached over to the bedpost, using it as a crutch to hobble around the bed. She had taken a few steps before her foot caught something, big and heavy, and she fell, tumbling straight onto Rowan, who was lying on the floor at the foot of her bed.

“Ahh!” Bree yelped as she fell. Stunned, she glanced up and gaped at him for a moment, then blinked twice to make sure it wasn’t a hallucination. She was lying on top of him, their faces so close that she could feel his warm breath that still smelled a bit like ale. His body, firm under hers, had softened the fall. But he hadn’t caught her, so he must have been asleep. She noticed his cloak was rolled up and under his head as a makeshift pillow.
How long had he slept there? She rolled off of him, narrowly missing his groin with her knee. He groaned, then pulled himself up to standing and held out a hand to her, still on the floor.

“We need to talk.” Rowan looked calm and composed, showing no sign that he had just been trampled on or that he was experiencing any of the same symptoms from the aftermath of the festival. Obviously he was in better shape this morning than she was. After all he drank last night, how was that even possible?

“Rowan, what the devil are you doing here? How long have you been lying there?” she demanded to know while allowing him to pull her to her feet. But she didn’t give him a chance to answer. “This is highly inappropriate. Who let you in here? Did you have to kill my guards to get in here?” She smirked at him.

“Funny.” But he wasn’t laughing. “No, your guards are outside the door, where they are supposed to be, and I think we need to talk.”

“You already said that,” Bree said. “But I don’t feel like talking to you. I don’t even want to see you, let alone be in the same room with you.”

Realizing she was standing before him in a damp white, and incredibly thin, nightgown, Bree reached down, trying to cover herself, to no avail. Rowan could still see her nearly naked body with the wet gown clinging to her curves and outlining the shape of her breasts and hips. He bit his lower lip to prevent a smile from spreading across his face. She would probably slap him if he smiled.

“Well, that may be a problem, my dear,” Rowan replied, crossing his arms. “It seems we are going to be seeing a lot of each other.” Even though Rowan hadn’t intended to see quite so much of her like this, he was hardly regretting it, inspecting her magnificent body once more. Under normal circumstances, being alone with Bree, in her room and half naked, would be a desirable situation.

“What are you talking about? Why would we–? Oh…”

Realization hit her like a boulder. Her personal guard. Nick had said the council would vote on it once they investigated all of the appropriate candidates. Bree hadn’t even known that Rowan was a candidate.

“Apparently,” Rowan began as he started walking over to the corner of Bree’s wardrobe, grabbing one of her robes, “the council feels that I am best suited for the job after our little excursion to find the wizard.” He walked back over to where Bree was standing and held the robe open. Bree turned around, and he wrapped the robe around her shoulders. She turned back to him, pulling the ends of the robe closed.

“They were highly impressed with my willingness to put myself in danger for you. I believe the words ‘courageous and clever’ were involved.”

“Did the words ‘foolish and pigheaded’ come up, too?” Bree asked, smirking.

Rowan frowned at her with narrowed eyes, though Bree could see the corner of his mouth twitch.

“And why didn’t I get a vote in the matter?”

“I already asked that, predicting you would say that very same thing. My father said it wouldn’t have made a difference. The vote was unanimous.” The way he said it, he sounded just as irritated about it as she was.

“I think we need to set some rules, Your Majesty.”

Bree gave him a blank look. Clearly she was not amused.

“Oh, you do, do you?” She folded her arms and began to tap her foot. Rowan stepped back out of reach, in case she decided to take a swing at him.

“I do,” he replied. “Three rules. First rule: you do not go anywhere without my knowledge. That means no sneaking off to the kitchens after midnight for an apple tart unless I am with you.”

“How do you even know about that?”

“I caught you once, remember? You were ten, I think.”

“Eleven. And if I recall, you only caught me because you were stealing honey brittle from Misses Delray’s stash in the pantries.”

“Regardless,” Rowan replied, shaking his head, “I can’t protect you if I am not with you. At. All. Times. I will even be sleeping in your sitting room, so I am close by. Always.”

“Number two: No consorting with strangers. Only trusted people can be in your company.”

Bree rolled her eyes but didn’t argue. “Go on.”

Rowan sighed, “And number three: please, for the love of all things holy, do not put yourself in danger.”

“Ha! Afraid you can’t protect me, oh courageous and clever one?” He knew she was patronizing him, but it was the truth. He wasn’t sure he could protect her. His father may have had confidence in him, but Rowan wasn’t as sure about himself. His skills were used to spy on and murder people, not to protect them. And Bree wasn’t an easy person to protect as evidenced by the wine goblet incident the night before.

“Just don’t go anywhere without me. I will send a chambermaid in to assist you in getting dressed, then I’ll be waiting in the hallway to escort you to breakfast.” He turned on his heel and walked out, slamming the door behind him.