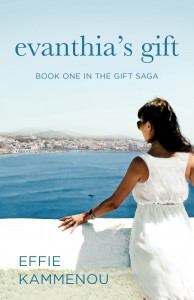 In the year 1956, Anastacia Fotopoulos finds herself pregnant and betrayed, fleeing from a bad marriage. With the love and support of her dear friends Stavros and Soula Papadakis, Ana is able to face the challenges of single motherhood. Left with emotional wounds, she resists her growing affection for Alexandros Giannakos, an old acquaintance. But his persistence and unconditional love for Ana and her child is eventually rewarded and his love is returned. In a misguided, but well-intentioned effort to protect the ones they love, both Ana and Alex keep secrets – ones that could threaten the delicate balance of their family.

The story continues in the 1970’s as Dean and Demi Papadakis, and Sophia Giannakos attempt to negotiate between two cultures. Now Greek-American teenagers, Sophia and Dean,

who have shared a special connection since childhood, become lovers. Sophia is shattered when Dean rebels against the pressure his father places on him to uphold his Greek heritage and hides his feelings for her. When he pulls away from his family, culture and ultimately his love for her, Sophia is left with no choice but to find a life different from the one she’d hoped for.

What Inspired You to Write Your Book?
Mainly, what inspired me to write this book was the death of my mother. Writing was a way in which to deal with my grief, and at the same time honor her culture and heritage. Parts of this story i had in mind for years. I created a love story and family sage from the story I had in mind, along with the many accounts of my mother’s life that I had heard for so long.

How Did You Come up With Your Characters?
Many of my ideas came from real life events, and stories I’ve heard all my life. I’ve also incorporated my own experiences and people I’ve met or observed into my stories, using them in different contexts, or combining the characteristics of several people to create a character.