You are here: Home / Non-fiction / English to Go: inside Japan’s teaching sweatshops by Craig Currie-Robson 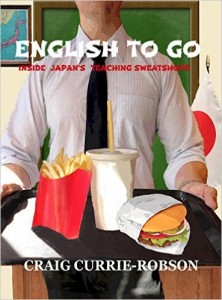 The English business in Japan is in trouble. Large chains such as NOVA cut salaries and benefits even as they profit and expand; Teachers go on strike at Berlitz and ECC. Gaba punishes staff for the tiniest transgressions and turns a blind eye to complaints against customers. Interac hires foreign workers who arrive to find their contracts have changed or do not exist at all.

From one end of the country to the other, Japanese language schools exploit their foreign teachers and local staff alike. English to Go takes you inside the commercial English teaching world to reveal an industry beset by labor disputes, illegal contracts, draconian discipline and sexual harassment, that has become more like fast-food service than education. Would you like fries with that?

What Inspired You to Write Your Book?
Working in the commercial English teaching business in Japan and realizing the whole industry was rigged against the teachers.

Book Sample
Michael Collison was not in the habit of leaving his mobile phone switched on in class, but today was the one exception. He was teaching as a dispatch ALT (Assistant Language Teacher) at a public school in Kanagawa, near Tokyo, doing well at work, the father of a one-year-old and about to become a father again.
His wife was in hospital due to late pregnancy complications and he was anxiously awaiting word from the doctors. When the phone rang he excused himself from the lesson. It was the call he had been dreading: now he needed to leave school early to be by his wife’s side. They had lost the baby.
His reason for asking to leave school early that day was obvious: it was a medical emergency. The response from his employer was unsympathetic. In a phone call the following day from the Yokohama office, a Japanese staffer told him the company required one week’s advance warning of a medical emergency. Apparently emergencies unfold very slowly in Japan. Dealing with the tragedy – and handling matters pertaining to the deceased infant – required a few more days off, for which Collison gave adequate notice.
Collison was by all accounts an exemplary teacher. The Hiratsuka district education board, to whose schools he’d been dispatched to teach, praised him for his efforts. His employer, the dispatch service sent him a letter of commendation in December of 2008, stating that ‘The feedback from your school was particularly good.’ It went on to assure him he could, ‘let this letter of commendation serve to show our gratitude for your hard work.’ Yet several months later, after the death of his child, and when it came time to renew his contract, Collison’s supervisors told him that he would no longer have a job in the coming semester. They were non-renewing his contract.
He protested the decision; one he felt was based entirely on his absence during his bereavement. In a high-tension meeting at the office with a foreign coordinator and another Japanese staff member, the company tried to pressure him into signing a letter of resignation, effectively waiving any responsibilities it might have as an employer dismissing an employee.
Collison took it up with the General Union and English language newspaper, The Japan Times; he sent an eloquent and moving account of his ordeal to author, blogger and foreigner rights crusader, Debito Arudou. After posting the story, Debito’s blog was flooded with responses from former dispatch teachers with similar stories of intimidation when it came time to sign their ‘resignations’, often for absences due to a sickness or death in the family. Japanese and foreign company hacks refused to let them leave the room, grew heated and flustered, coerced and bullied until teachers relented. In at least one instance, a foreign supervisor ripped off his necktie and paced the room like a scene from a bad cop movie.
Debito (otherwise known as David Schofill) sought and received a response from the dispatcher. Though it was rare to see an English provider face the foreign press over allegations of wrongdoing, the response was still tepid. The company insisted that Collison’s dismissal had nothing to do with the medical emergency, but it was unable to provide an alternative reason, citing ‘privacy’ concerns. The email weakly promised to ensure such ‘miscommunication’ would not occur in future, but notably did not mention how. It was not signed off by a company representative, and nobody’s name appeared on the document at all. It ended with a simple, ‘Thank you for your support, Interac.’

Buy English to Go: inside Japan’s teaching sweatshops On Amazon