You are here: Home / Non-fiction / Business Books / Engineering Paradise: Are You Ready? by Sylvain Rochon 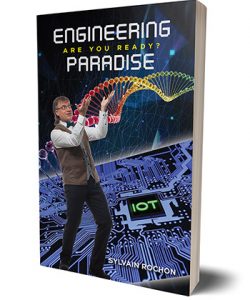 Artificial Intelligence, automation, gene editing, 3D printing, nanotechnology, quantum computing—technology is all around us. But are you ready to take advantage of them? This book will help your company or organization adapt to the technological revolution. It will reveal the opportunities that exist today.

I want to make the world a better place. No, I want to transform it! I believe that the latest technological innovations can help entrepreneurs, scientists, administrators, and visionaries do it. Together, we can create a world where all our basic needs are met and where we can flourish.

Technology evolves at such a rapid pace that humans can’t keep up. Or can they? This book answers that question. Are you ready? Don’t get left behind.

What Inspired You to Write Your Book?
I have been working as a futurist for a while and thought it was time to explain to people how we can leverage modern technologies like artificial intelligence, genetic engineering, nanotechnology, 3D printing, blockchain and more to transform our world into one where we don't need to work for a living anymore. It was a revelation to me a while back that this was becoming possible. However, too few people were talking about how to get there as the changes we'd need to make would disrupt current systems in place, and honestly people are scared of the uncertainties of the future. So writing a book (or two) and going on the road as a speaker to educate the population and stakeholders was just logical.

Book Sample
2017 has started with a bang with most people talking about how virtual reality will change our lives. Games like Pokemon Go have put augmented reality in the public eye. I have to say; the gaming industry is abuzz with talk about how to use virtual reality (VR) and augmented reality (AR) for profit. Other industries are considering using these technologies in order to compete in the marketplace.

Now, for the uninitiated, virtual reality refers to computer technologies that allow people to immerse themselves in a completely virtual world. Often, virtual reality devices also cover the audio aspects but can also include body suits to simulate temperature or pressure changes (what we call haptics). People may remember the earliest VR experience being of an Aspen environment, thanks to the work of some MIT engineers as early as 1978.

The point is, virtual reality is not a new idea; back in the day, it did require expensive sophisticated equipment. Interestingly enough, current VR equipment is not cheap… yet. The difference is it took all those years to refine the systems enough that decent VR experiences could be presented to the general population. This, of course, is all made possible singularly due to increases in computer processing power.

Thankfully, processing power has been increasing exponentially in a predictable manner due to advances in miniaturisation, global adoption of computer devices of all sorts, and new materials research. The exponential increase in computing power is best described by Moore’s Law: A prediction that has been true since its first observation by Gordon Moore in 1965. It defines a trend that persists in which the number of transistors per square inch doubles approximately every 18 months. It still holds now in 2017, which means that computers of 2029 will be able to compute just as fast as a human brain, which is quite a feat indeed. Yes, ladies and gentlemen, in 12 years, our technology will potentially be able to operate just as fast as the human brain, and if we’re successful, perhaps replace human toil completely. We’ll get to that later in this book because this is critical to the paradigm shift that you, my reader, will have to make to succeed in the world of tomorrow.

Ultimately, virtual reality, with all its fascinating applications, is only now becoming interesting. Only today can we start creating believable simulations that our minds will properly accept.

And it’s only going to get better.