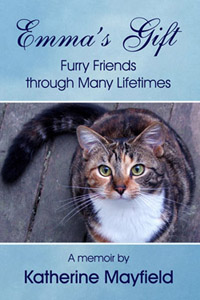 “This heart-touching memoir is a celebration of the eternal bond between cats and humans that will resonate with anyone who has ever had a special cat in their life.” – ConsciousCat.net
Award-winning memoirist Katherine Mayfield’s obsession with cats led her to rescue an abandoned kitty, Emma, who taught the author about love and respect, and confirmed her belief in reincarnation.
Facing the loss of Emma after a 17-year relationship, the author embarked on a search for a deeper relationship with God and the Universe, and began to understand the real root of her lifelong obsession with cats.
Emma’s Gift is a celebration of the soul connection between animals and humans: the eternal, loving bond that transcends the physical dimension.
Packed with amazing insights about our current civilization and the human-animal bond, this heartwarming memoir will touch your heart and broaden your perspective on the nature of Life itself.

What Inspired You to Write Your Book?
I believe that our pets can "reincarnate" and join us several times during our human lifetimes. When I experienced one of my pets "returning" twice, I wanted to share my beliefs and experience with other cat lovers and readers.

Book Sample
After Skippy died and I realized I didn’t want to stay in the space we’d shared for so many years, I started making plans to move. One night I dreamt that I was going home to my new apartment. The building was a two-story red-brick duplex, long rather than tall, and there were just a couple of steps up to the front door, which was white, set in a white frame. There were two large picture windows on either side of the door—one for each first-floor apartment. In the dream, the building felt like home, and Skippy was sitting on the front steps, as if she was waiting to greet me when I got home.
Weeks later, I was looking at apartments, and one afternoon on the way to see another one, a beautiful sun dog appeared in the sky—a glorious basket of rainbow colors hovering not far above the horizon. As a creative and spiritual person, I often look for “signs” from the Universe, and so I figured the next apartment might be something I’d be interested in.
I pulled into the parking lot, got out of the car, and turned to face the same long, two-story red-brick building with white door and picture windows that I’d seen in my dream. Two steps up to the front door, and I knew this was home. I thanked Skippy for helping me find the apartment of my dreams, and somehow I wasn’t too surprised to see a young cat who looked like her peeking out of the window next door a few days after I’d moved in.
The Universe is a marvel! How could I have known what that apartment building looked like before I even saw it? Did Skippy somehow transmit the image to me from the other side? And did my dream mean there could be some kind of connection between Skippy and the young kitty in the apartment next door? I think our animal friends are even more amazing than we already think they are.
Pointed ears standing straight up, the little gray tabby looked directly at me, as if she knew me. I felt as if I was looking at Skippy in a kitten’s body, felt a shock of recognition. I took a couple of steps toward her, and the curtains swished shut as she disappeared.
I saw her now and then when I came home. When the curtains were open, an elderly yellow cat could be seen stretched out on the back of the couch in the sun. His ears looked like they’d been injured in a fight, because they were ragged and shortened to within a half-inch of his head, but he always looked blissfully happy.
I began to look forward to sharing a flirting glance or two with the little gray tabby when I came home. Eventually, I could get within a few feet, and we would stare at each other through the glass. I never saw her there when the curtains were open, only when she had the protection of them around her body.
As I developed a peek-a-boo relationship with my neighbor’s kitty, I began to think about getting another cat. But the Universe had something else in mind.