You are here: Home / Fiction / Elijah’s Conquest (Book One) 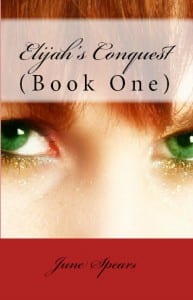 He met his fate at the young age of only seventeen. Elijah Fitzgerald, sets out to find the one person who changed his life.

He finds his conquest fueled by the lust and hunger of his innermost desires, far beyond his wildest dreams.Will he ever find “The One” who will tame his ways forever?

A story filled with love, lust, betrayal and deceit.

Born and raised in Atlanta, Georgia, June E Spears had spent her early years writing mostly poems and school songs. However, she could not escape the allure of storytelling and quickly began studying to become a novelist. She began by reading every chance she had. Mostly Fantasy and Romance novels, June’s love of writing was uncontrollable. Once she began typing, she never stopped.

June is best known for her Fantasy Novelette Series “The Blood Moon Chronicles”. She is a single mother to her only daughter Isabella Rose.