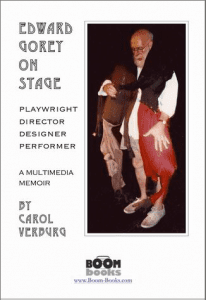 “A is for Amy who fell down the stairs. B is for Basil assaulted by bears.” Most fans of the artist Edward Gorey know him as the author of lavishly drawn, sparely plotted little books in which hapless characters come to unpleasant ends. But if you happened to be in the right place at the right time, you might know him as a dramatist. From Boston’s Poets’ Theatre to New York’s Broadway, and from Bourne to Provincetown on Cape Cod, Edward Gorey applied his distinctive wit to writing and directing plays for actors and puppets–occasionally including himself. This short memoir is an affectionate chronicle of Gorey’s theatrical experiments by the friend and neighbor who produced most of them. Illustrated with photographs, script and review excerpts, and drawings Gorey created for his twenty-odd “entertainments.”

San Francisco writer Carol Verburg is best known as a playwright, director, and author of best-selling books including Ourselves Among Others, Making Contact, and The Environmental Predicament. The regular producer of Edward Gorey’s plays on Cape Cod, Verburg also directed several plays of her own, including Lady Day in Love and The Whistling Pig, as well as the first workshop of Kurt Vonnegut’s Cat’s Cradle and the unofficial U.S. premiere of Peter Shaffer’s The Gift of the Gorgon. Her play Spin, or Twilight of the Bohemians, won the 2011 Ashland New Plays Festival and 2012 Centenary Stage Co.’s Women Playwrights Series. Recent books include Croaked: an Edgar Rowdey Cape Cod Mystery and Silent Night Violent Night: a Cory Goodwin Mystery.