You are here: Home / Bargains and Freebies / Bargain Books Under $3 / Echo from Mount Royal by Dave Riese 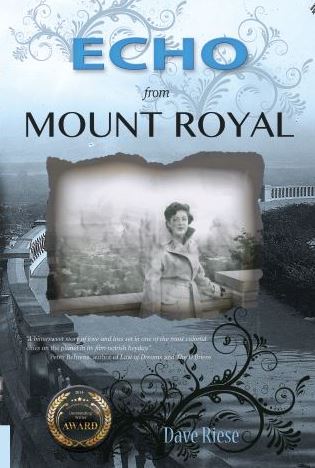 Imagine you are 18 and fall in love with a handsome, wealthy young man. Your romantic dreams have come true – except his family hates you!

Montreal, 1951. Rebecca Wiseman, 18, a bright college student, lives with her working-class parents. At a local dance, she meets a handsome young man but has little hope of seeing him again. When Sol Gottesman asks her on a date, her joy mingles with disbelief when she learns he is the son of a wealthy businessman.

Sol takes her in his family’s chauffeured Rolls-Royce to the most expensive restaurant in the city, introducing Rebecca to a world of upper-class wealth and privilege. Rebecca is head over heels in love and believes her life is perfect.

But despite Sol’s outward charm, he lacks self-confidence and trust. He reveals the simmering conflicts in his family and his fears that his brother will drive him out of the family business. Rebecca, headstrong but naïve; wants to protect Sol and help him to stand up to the pressure from his family. Their engagement fulfills her romantic dreams, but his family ‘s resistance and the revelation of a shocking sexual secret threaten to tear them apart. Rebecca tries to convince Sol that her love and support is all he needs. A late-night telephone call threatens to change her life forever.

What Inspired You to Write Your Book?
Before going to work, I’d often meet an elderly Jewish woman in the coffee shop downstairs from my office. We talked ‘books,’ sharing a similar taste in fiction. When she learned that I was a writer, she told me many stories about her experiences growing up in Montreal before and after WWII.

Her story about her engagement as an 18-year-old girl astounded me. She invited me to ‘write it up,’ thinking it would make an interesting short story. Over the next ten months, I gave her chapters to read. When the 300-page manuscript was finished, she hefted the pages laughing, “This weighs more than a short story!”

How Did You Come up With Your Characters?
Having written three short stories with these characters before starting the book, I had a head start. New characters were Sol, the fiancé, his overbearing parents, and his treacherous brother Ezra. These characters are loosely based on real people but have been changed dramatically. The existing and new characters required creating their past experiences, their motivations, and their responses to the actions of other characters.

When I sit down to write, I often imagine that I am going to visit friends and spend the day with them. At first I will take control of the visit to get things started, but eventually the characters exert their influence and I am content to become an observer.

As I write, I watch them acting out the scene and listen to what they say. I often feel the ideas go from my subconscious directly onto the page. Things happen that I never imagined. The characters may begin to act out one of my own experiences. They say things I wish I had said at the time. While in this semi-unconscious zone, I let them do what they want and only rein them in when they risk going off the plot’s cliff.