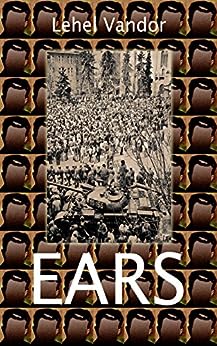 What inspired you to write your memoir?
Memoirs are usually written while going through rustling bundles of sepia-toned mental images and yellow, stained pages of the mind… However, some memories, like those of a communist dictatorship and of the radical transformation of a country after a regime’s violent demise, after a while start to seem like acquired collections of someone else’s surreal celluloid strips, film cells seen at some point in the past and now rapidly fading – a decay hastened by the clash between their very absurdity and the rational mind’s immune reaction.
The world that surrounded me for the first nineteen years of my life, a world shaped by Ceausescu’s regime of daily Kafkaesque assault on rational thought, has been changing radically (but only partially) since the Christmas of 1989.

There have been many volumes written about such societies, countless hours filled with documentaries on the vast political, economical and of course, ideological forces at work…
However, I set out to write, based on my memories of the Romanian pre- and post-Revolutionary years, street-level impressions that revealed also often-surprising similarities between the old and the new country.

After having left that country almost twenty years ago, but regularly returning there to this day, I can still meet and converse with many ghosts – ghosts, who cosily nest in the altered, recently turned ultra-materialistic, world of the Carpathian Mountains.

I wanted therefore to write about that past, in which those ghosts still possessed powerful bodies in my weathered homeland, making Europe seem just some distant mirage; the memoir is also about the present in which that world, still silently and slowly being kneaded by these ghosts, hastily re-decorated for its welcome party into a suddenly so reachable and tangible Europe…
While my home land copies the West indiscriminately, eagerly, desperately, the latter has been gradually permeated by thoughts that I hoped to leave behind in both time and space. The eerie resurrection of totalitarian concepts and violations of basic human liberties in the citadel of democracy in which I live in, all committed in the name of building a “safer” society, were terrifying for someone who had seen the very same thoughts and strategies in action – albeit in a very different world.

Therefore, in addition to it being a “plain” memoir, I tried to highlight the parallels and analogies that often I myself was surprised to find between my old and new home.

About your Book:
Ears, too many of them, catching any accidental voicing of free thought, the tragicomedy of spraying trees with green paint during the Leader’s visits… The deadly denial of the existence of “imperialist” diseases, a few hours of TV broadcasts per day, food rationing, power cuts… Then, the Revolution of December 1989 – the swapping of communism with democracy, stability with chaos, external threats with internal tensions, power with corruption, religion with greed… and one dread with many new fears.

It is a personal journey of someone, who was a Transylvanian-born child of Hungarian minority during Ceausescu’s dark 1970s, a teenager during the suffocating Romanian ’80s, a student during the surreal ’90s, and an emigrant during the more recent decades.

His journey from a world that Kafka imagined, but Ceausescu created, to a society that is still fighting with its numerous ghosts reveals parallels between facets of a totalitarian society of the past and those of a rapidly Westernised society.

The post-Revolution Romania is still struggling with the regime’s echoes, with numerous paradigm shifts, and with a vast corruption that has permeated every aspect of daily life.

Having completed his PhD in the United Kingdom, the author has also had the opportunity to experience and meditate on the tectonic shifts in British politics – and on their surprising social side effects.

The powers of the author’s former homeland had tried to police every sentence and every action, in an attempt to protect the system against a faceless and ubiquitous enemy, via measures that violated fundamental human rights on a daily basis. His adopted home, too has obsessed about a very different enemy, and has used many electronic ears and eyes in the name of creating a safer society.

There is also special attention given to the realities of ethnic minorities during the Ceausescu regime and the detrimental transformations that the minority communities, their political representation, and even their outlook have gone through in the post-Revolution period.

This second, extensively revised, edition contains numerous updates that take the reader through the changes witnessed in both societies since the book’s first publication in 2008, now including the period leading up to the 25th anniversary year of the Romanian anti-communist Revolution.

Ears, too many of them, catching any accidental voicing of free thought, the tragicomedy of spraying trees with green paint during the Leader’s visits… The deadly denial of the existence of serious “imperialist” diseases, three hours of TV broadcasts per day, food rationing, power cuts… Then, the Romanian Revolution of 1989 – the swapping of communism with democracy, stability with chaos, external threats with internal tensions, power with corruption, religion with greed… and one dread with many new fears.

How did you decide how to publish your book and where is it published through:
I first posted several chapters on the YouWriteOn website in 2008, a site that was launched with funding from the Arts Council in the UK. Based on peer reviews and feedback, I decided to submit the book to their publishing service. The paperback was then available at the end of 2008 via the major retailers like Amazon, Barnes & Noble, Waterstones etc.
As the 25th anniversary year of the 1989 anti-communist Revolution arrived, I decided to put the first edition through a major revision and update, as most of its points and parallels remained valid, and some have even become more poignant.
Thus the 2014 edition was made available in e-book format via Amazon and, with the help of Booktango, in other formats, too.

How do you see writing a Memoir as different from writing other genres of books?
It is inevitably personal – and the more it is written with honesty, the more personal and grueling it can become – as the often advantageous detachment of the author from the text is not possible.
However, at the same time, one has to maintain some objectivity as much as possible, and also one has to be able to structure the text, to review it, edit it as if it were “just” some story line about other people…

Author Bio:
Lehel Vandor (1971-) was born in Transylvania, and grew up, as a member of the Hungarian ethnic minority there, during Nicolae Ceausescu’s totalitarian regime. His school, and later high school, studies have been completed during the communist dictatorship.
The 1989 revolution in Romania and the 1990 ethnic pogrom organized by the newly formed Romanian extreme right happened during his final year at high school. In 1990, the first generation of students of the free Romanian began their University studies. Lehel Vandor, too was among them, and the five years of student life have been a memorable experience in the country that was just starting to find its way.
After finishing University in Transylvania, he obtained his PhD in the United Kingdom and permanently settled there. Radical changes in British politics, 9/11, the subsequent War on Terror, and its measures introduced by Tony Blair’s government have provided numerous opportunities for drawing certain disturbing and surprising parallels between two very different societies caught up in their ideological and political fights with very different enemies.
Previously Lehel Vandor authored several series of articles and radio programs in Hungarian and Romanian languages, published short stories in Hungarian language. His photography is represented by several photo libraries. One of his other passions is electronic music composition and production.