You are here: Home / Fiction / Mystery/Suspense / Dying for Justice by Pauline Isaksen 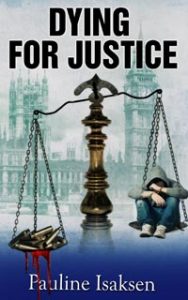 She wanted the truth – They wanted her dead

Do you love a mind-bending murder mystery? DYING FOR JUSTICE will drive you crazy as you try to work out whodunit.

When London lawyer, Julia Ainsworth, is called to defend a sixteen-year-old boy on a murder charge, she is driven to risk everything to discover the truth. But when she becomes the next target, she realizes that the truth could mean justice or death.

In a desperate game of cat and mouse, Julia must uncover the political power-base intent on keeping the biggest secret of all.

DYING FOR JUSTICE is a thriller that will have you guessing to the last gasp and be warned: The ending might haunt you forever!

What Inspired You to Write Your Book?
I love murder mysteries and trying to find out whodunit. But I am sometimes disappointed with the amount of sex and profanity, and often have to throw books away. So, I decided to write a fast-paced, exciting thriller with no sex or profanity.

How Did You Come up With Your Characters?
I knew my protagonist would be a woman from London, but the other characters appeared when I needed them. And, strangely enough, each of them appeared in my mind with their name. Finding names was never a problem for me.

The sun veiled behind a bleak gray cloud, bounces shards of light through the morning sky. British summer weather, sun and cloud, nothing new.

They hurry, swallowing up the worn dirt path with long, anticipatory strides, impatient to reach their predetermined spot. Heavy rifles, harnessed on broad shoulders, swing in time to their steps.

Backpacks, thrown roughly on the ground, puff life into green foliage and small animals scurry to safety. Leaves wave in unison with the soft breeze, and the smell of fresh vegetation and clean air fills their lungs. They inhale deep breaths, savoring the taste of the woodland, the air stroking their skin like a brush meeting its canvas for the first time.

They load rifles, check scopes, and scan the meadow for innocent prey.

A man crumples to the ground, his legs sprawled, his arms limp, his eyes wide open. The other stares, first confused, then shocked, and then sickened as blood courses from his friend’s brow, staining his eyes, nose and mouth.

He drops to his knees, disbelieving.

A sound of running feet cause him to lift his head. The tramping sound comes closer and grows louder. Then stops abruptly.

At a quarter to nine, the cabbie dropped Julia at the offices of McKenzie, Kent, and Ainsworth – Law Firm. Pocketing the hefty tip, the cabbie winked and shouted, “Have a good one, luv,” as his multi-colored cab screeched away from the curb. Her eyes followed him along the Strand and into Fleet Street. Beyond that, she could see the dome of Saint Paul’s Cathedral booming upwards, dominating the skyline with its cold gray stone.

She closed her eyes and inhaled with the full force of her lungs. She could smell London. The heady aroma of car fumes mixed with morning pastries, burning brakes, hot rubber, newspaper stands, railings, flowers, and money.

Her assistant, Michelle, greeted her with a huge, bright smile as Julia strode past her desk.

“Good morning, Miss. Ainsworth, how are you today?”

“Fine, thank you.” Julia kept walking toward her office but stopped for a fleeting moment to admire the name-plate fastened to the solid oak door. It still made her tingle with delight to see it there. At twenty-five, she was the youngest lawyer the firm had ever had.

Michelle walked behind, fussing over her notes. “Your e-mail’s awfully full,” she said apologetically, as though it were somehow her fault. “And I’ve put several papers on your desk that need signing. Your first appointment is at 10 a.m. with your father to discuss the Bradley case…”

Julia’s shoulders relaxed, and she took a deep soothing breath. The thought of being with her father brought a broad smile to her face. Because of his political engagements, he was only in the office for two or three days a month, and she relished any time with him, talking and listening to his sage advice. She knew she needed him today more than ever.

Although her father was a successful and well-respected lawyer — now turned politician — it was her late mother, Elizabeth, who’d inspired her to study law. Curiously enough, Nigerian born Elizabeth, hadn’t been a lawyer, but a painter, and not a very good one at that. But she was a passionate painter who loved her art, and from an early age Julia could remember her mother carrying an easel, several canvasses and an array of paints wherever she went.

Michelle was still babbling on, “Your appointment with Detective Sergeant Crane is at 2 p.m., after which you’ll be meeting with Mr. and Mrs. Bradley at their house. Then at 5 p.m., Michael will be ready for you to interview at the police station.”

“Thank you,” Julia said, her back turned to the door, her arm waving dismissively. She was looking at the magnificent stone edifice in front of her — the Royal Courts of Justice, commonly called the Law Courts. The building housed the High Court and the Court of Appeal, and its architectural details in Victorian Gothic style boasted of a time and age now long forgotten.

A muscle twitched in Julia’s neck. Normally, she felt brave and confident, but she could already feel a knot in her stomach as she thought about her hectic meeting schedule. She knew these first few days after the killing were critical.

She slid into her black-leather office chair and swiveled to face the desk. Turning on her computer, she clicked a tab, and opened The Guardian, but when she saw the headline, her body froze in horror.

She read the article, furrowing her brows and tightening her lips into a thin line, feeling sick to her stomach.

One day. One day! Couldn’t they wait any longer than that?

She stood up and reached for the coffee pot that Michelle had prepared for her, poured herself a cup and closed her eyes. The only type of coffee she drank was made using medium-roasted beans from either Costa Rica or Panama. No sugar, no milk, no cream — just pure bouquet — like a good red wine.

At 9:50 a.m., she left her office and walked to the fourth floor to meet her father. The door wasn’t open when she arrived, but she knocked and sauntered in without waiting for a reply.

He was sitting at his deep-red mahogany desk talking on the phone. When he saw her, he waved her in and said hurriedly, “I’ll have to call you back later.” Then he hung up, a red color flushing his neck.

When her mother died, Jack Ainsworth hadn’t recoiled into himself or thrown himself into his work as others might have done. Instead, he’d taken the time to be with Julia and to help her through her heartache; although he’d surely suffered from his own. Those first few months after her mother’s death solidified Julia’s relationship with her father in a way that nothing else could have done.

Her mother died of a rare disease contracted during one of her many art trips to Africa, and her body still lay buried there. The disease was so rare that the British Government had refused to allow the body to return to England. Julia was fifteen at the time.

Jack stood up and smiled, brushed his thick black mustache that partially covered his top lip, and raised his bushy eyebrows. Julia smiled back as she thought, once again, that he looked like a happy walrus.

“Hello darling, how are you today?” He hugged her and motioned to the maroon leather sofa by the wall.

“Fine, thanks, Pops, and you?” She sat next to him, pecking his cheek as she did so.

“Oh good, good. You know, busy, but good.” They continued to catch up for a few more minutes and then Jack smiled. “Thank you for taking the Bradley case. I understand you’ve got a hectic day today?”

“Yes.” She pursed her lips. “I’m meeting the detective at the crime scene, then visiting the parents, and then Michael after that.”

“Excellent, honey. I wasn’t able to view the crime scene yesterday, so I’m very glad you’ll have a chance today.” He rested his elbows on his too-many-beers-stomach and formed a steeple with his hands. “And how are things looking for the boy?”

She shook her head. “Not good. Of course, he’s only sixteen so the police are treating him as a juvenile. As you know, they’ve charged him on suspicion of murder, and if he’s convicted, he’ll go down for a minimum of twelve years. I’m meeting with the Crime Prosecution Service on Friday morning. I wanted to ask you what you think he might get if they reduce it to a manslaughter charge?”

“Difficult to tell at this stage,” he began, “With a not-guilty plea I think he’d get four to six years, but with a guilty plea, probably two to four. After he’s served half the sentence, there would be the possibility of parole. What do you think?”

“Yes, I was thinking something along those lines. Pops, do you think he meant to kill Thornton?”

Jack leaned back and stroked his mustache again. He sighed. “The evidence certainly points toward it. What makes you ask that?”

“Oh, nothing really…” she hesitated. “Just a couple of things in the police report that… well… I don’t know how to explain it.”

His eyebrows furrowed. “It all seems quite clear to me, love. You don’t have a problem taking the case, do you?”

She sighed and then threw him a huge smile. “No. No, it’ll be fine.”

“Good. Did you get a chance to read through the notes from my visit to the police station yesterday?”

“Yes, of course. Several times, actually.” She tapped the laptop resting on her knees. “I have them right here.”

“So, what can I do to help, love?” he asked, his smiling blue eyes catching hers.

She flicked her long, chestnut-colored hair away from her face and popped open the laptop lid. “I have a few questions I want to discuss with you about your notes. I hope now is a good time?”

Buy Dying for Justice On Amazon