You are here: Home / Fiction / Mystery/Suspense / Dying at Honeymoon Inn by Judy Fitzwater 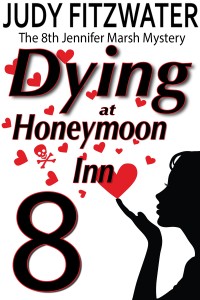 Jennifer and Sam are going on their honeymoon! Sounds wonderful, except that Jennifer has no idea where Sam is taking her. It’s the middle of winter, so it has to be someplace warm with plenty of sand and sun, right?
Imagine her surprise when she finds herself in the middle of a snowstorm in Pennsylvania in what’s advertised as a “haunted” mansion for a murder mystery weekend. She’s intrigued, especially by the amazing special effects created by the inn’s owner, Rex Ferris.
But things seldom go smoothly for Jennifer, and when a fellow diner face plants into her coconut cream pie and dies from a seizure, Jennifer suspects murder. After all, the victim is on a girls’ weekend with her frenemies from college. Who could possibly want her dead, except every one of them? And who else might be on Jennifer’s suspect list? The only thing certain is the killer is still nearby, trapped by three-feet of snow and dangerous travel conditions.
Fans will be happy to see Mrs. Walker crash Jennifer’s honeymoon to take over the murder investigation, so Jen and Sam can get back to their romantic activities. Fun and romance vie with an intriguing mystery that will keep the reader guessing to the very end.
Dying at Honeymoon Inn is the eighth in the delightful Jennifer Marsh Mystery Series.

What Inspired You to Write Your Book?
This is the 8th Jennifer Marsh Mystery. In Jennifer’s 7th book, she and Sam get married. Now it’s time for them to go on their honeymoon, even if only for a weekend. I chose to set this book at the Ferris Mansion where murder mystery weekends are performed. It’s the same setting I used for my ghost romance, Vacationing with the Dead. I thought it would be fun to marry these two worlds. Of course, there are no real ghosts in the world Jennifer inhabits, so the true details of what goes on behind the scenes at the mansion won’t be revealed in this book. I’m saving that for a companion book, my next project.

How Did You Come up With Your Characters?
Jennifer Marsh is a mystery writer who has suffered the difficulties of getting published through the seven books in her series. She’s a mishmash of every ambitious, frustrated, overly dedicated writer I’ve ever known who is chasing that first sale. But as the book industry has changed over the years, so have her opportunities, and in this book, she finally gets an offer. Her companions in this quest are her faithful writers’ group, who are, again, based loosely on the wonderful women I met on my journey toward publication. The elderly Mrs. Walker is a complete figment of my imagination. I hope to be just like her in my eighties. Sam is a wisecracking newspaper reporter. I made him to fit Jennifer’s quirky personality. He’s witty and flawed and knows Jennifer like no one else does. They make a great team, and I love writing about them.

Book Sample
“Oh, look,” Ellie sang out. “Out the window. It’s snowing hard. We might just get those twenty-four inches they were calling for after all!”

“We’re already well past that. Last I heard they were predicting thirty-six,” Harry supplied.

Great. The promise of feet of snow that had seemed so lovely and novel to a Georgia girl when they’d first arrived and that glittered past the outside lights like sparkling diamonds had just turned into a trap. Hopefully, tablemates weren’t cemented for the weekend. If they were, she’d have to have a chat with their host. Worse still, if the weather got really bad, they might be stuck at the inn with these loonies and no recourse come Sunday afternoon when they were supposed to leave to catch their plane home.

Suddenly, Cindy groaned and then huffed as she tried to suck in air. “I…feel…like…crap.” She started rummaging in her purse between gasps.

“Do you need your inhaler?” Kathy asked, taking the bag from her and opening it in her lap. She pulled out a cylinder with a mouthpiece on it and handed it to Cindy, who pushed the plunger and took a deep breath of whatever medicine was in it.

Kathy threw Margo a death glare. “Really, Margo, can’t you ever just let things go? Look what you’ve done.”
“Cindy has asthma,” Lindsey volunteered to Jennifer. “Almost anything can set it off.”

One more bit of information Jennifer had absolutely no use for. She stared at her plate and concentrated on making her very delicious meal—yes, this was exceptional pasta primavera—disappear as quickly as possible and turning the conversation into an indecipherable murmur in her head.

She knew all about friendship and what it should be, but the barbs that were flying back and forth among the four young women at her table had nothing whatsoever to do with love and support. No, this was toxicity at its worse. Why the heck they were still in touch with one another, she had no idea.

Waiter Steve approached once more with a second server who began picking up plates. He offered a tray of cheesecake, chocolate cake, and coconut cream pie to choose from, stopping first at Cindy’s side. She looked a tiny bit better, offering a small smile when Steve suggested she select the pie, which she did, even if she didn’t look as though she wanted it. She even took a bite, while Steve watched and smiled down at her.

Sugar made everything better, especially when it came in the form of chocolate. Jennifer grabbed a slice of the decadent cake. Sam also chose the coconut cream pie—no surprise there—leaving the “girls” to snipe about weight as their desserts were served.

“Oh, good grief. Just eat it or don’t,” Jennifer said. Oops. She hadn’t meant to say that out loud. At least it shut them up for a moment.

Immediately the wait staff evaporated from the room, not even bothering to serve one more round of coffee to Harry and Ellie.

Cindy took a second, small bite of pie, and Jennifer went after another forkful of that luscious fudge cake.

“Remember. Note where your dessert is because—” Mr. Mayfield admonished.

The chandeliers went dark at exactly the moment that every other light in the room snuffed out, as well as all of the exterior lights that had beamed through the large windows. Even the flames in the fireplace disappeared, leaving only the ominous glow of embers. It was as dark as anything Jennifer could ever imagine, even in her worst nightmares.
Suddenly a cold breeze swept the room, chilling Jennifer to the bone. She shivered and not just from the cold.

Beneath the table, she found Sam’s hand and held it in a death grip, her chocolate cake completely forgotten. Well, almost forgotten. It was out there somewhere. In the dark. Where bad things happen.