You are here: Home / Fiction / Action & Adventure / Duval and the Infernal Machine by Michele McGrath 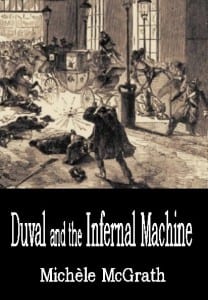 Based on the real life attempt to assassinate Napoleon Bonaparte in 1800. Invalided out of the French Army, Alain Duval joins the Ministry of Police in Paris, led by the infamous Joseph Fouché. Newly appointed and off duty he is strolling through the city when he sees a crowd waiting for Napoleon, the First Consul, not yet Emperor. He is jostled by some men leaving the area in a hurry and shortly afterwards a bomb, the ‘Infernal Machine’ explodes. Next day, Duval describes the men to a police artist and joins the hunt for the bombers. Horse-shoes and barrel hoops send him searching all over Paris. Eventually he finds the warehouse used by the bombers and his mentor is killed in the subsequent fight. Some of the bombers are captured but others escape, then Napoleon puts an abrupt end to the search, blaming others for the outrage. But the story is not over. Duval falls in love with his mentor’s daughter, and together they find another of the bombers, leading to a surprise ending.

Author of books and short stories in hardcopy and ebook fomats. She has won a number of competitions including an international one. She specialises in fantasy, often historical, having trained as a historian. Gigi’s Guardian includes Michele’s experiences in London in the 1960s. Visit www.michelemcgrath.co.uk for more details.