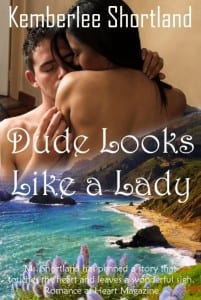 Pamela Howard can’t believe what she let her friend Maisie talk her into – a charity costume contest where she’s made to dress as King Louis XVI. Her partner, dressed as Queen Marie Antoinette, reminds her of a man she’s spent five long years trying to forget.
Hank Delacroix is ready to throttle his friend Jake. Hank is a great clown around his 49er teammates, but six-inch heels and a poodle on his head are a bit much. He has to be the tallest drag queen in the state. When he meets his Louis partner, he can’t keep memories of the only woman he ever loved from waking in his mind.
When Hank realizes Louis is his ex-fiance, he has to find a way to make her stop running away from him so he can finally apologize.

What Advice Would You Give Aspiring Writers?
Write often

Author Bio:
Kemberlee is a native Northern Californian who was raised in a community known as Steinbeck Country, home to author John Steinbeck, as well as Jack London, Robert Louis Stevenson and others. With so much literary influence around her, it’s not hard to see why Kemberlee fell in love with the printed word.