You are here: Home / Fiction / Duck’s Misery by J.M. Denholme 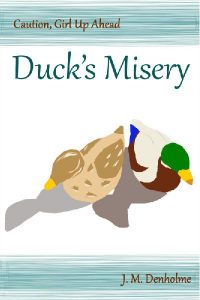 We all have a place in our youth where deeds and words linger even though we do not. Vince is a guy with the world in his pocket until a day at Duck’s Misery sends him colliding with his past. Let Vince take you along on his journey … someday you may find yourself making a similar one of your own.

What Inspired You to Write Your Book?
Feelin’ nostalgic? Did you come of age during the 90s? Want a taste of life growing up in Midwest, USA? These were some of the things that inspired me to write “Duck’s Misery” … and just some girl called Ella. The 1990s music, clothing styles, popular cars, mindset, the fierce need for independence that existed in the youth–all of it provides a fantastic setting for great stories wanting–needing–to be told.

How Did You Come up With Your Characters?
The characters in “Duck’s Misery” slowly emerged and quickly evolved all their own. I provided the setting and their concerns, ideals, expectations, and attitudes gave them form enough for me to weave their stories waiting to be told.

Book Sample
As she’d been gunning for me from the start, Suzi wasted no time in offering to drive the two of us somewhere more private and we got well underway in her two-door sedan, its new car smell mingled with her CK One.
She pulled out of the parking lot and cracked her window. “So UW, yeah? I wondered why I never see you around town.”
I wondered if it really mattered to her whether I believed that rehearsed line or not, and smiled. “One more year to go.”
She turned the volume down on the radio, some over-the-top DJ had begun hemorrhaging about a contest. “You here long?”
“No, I’m just visiting for the weekend–see my parents and celebrate my twenty-second with some of the guys.” I ran my eyes along the long length of her legs, appraising her knee-high, petrol blue, suede boots and how they would look spread before me in a high and wide V. “I have to admit, I don’t remember you.”
She shrugged, laughing. “I wouldn’t expect you to and I’m glad! I wasn’t exactly ‘in bloom’ during my freshman year”–she glanced at me with a wink–“nothing like now.”
I couldn’t feed her the compliment she was fishing for because a feminine voice from my past was suddenly impersonating Cobain in my head.
“ … But you–you’ve always looked good.” Suzi’s openness was refreshing for me after having dealt with college girls for so long.
With a forced clearing of my throat I hushed away the ghostly voice and stared at her pointedly. “You knew I was in town.”
Her lips parted and pressed together several times before speaking. “Carrie–my friend–called me last night … said she’d seen your Jeep at your parents’ ”–stopping at a red, she turned to face me–“look: I’m not a stalker. I’ve kind of had a thing for you for a few years and I just wanted a chance for us to hang out … you know?” The light turned green and she turned back to driving, chewing her lip nervously.
In the minute of silence that passed, she’d driven us into the countryside and my ego finished snacking. “A ‘kind of thing?’ ”
“You’re enjoyin’ this, aren’t you?”
I was enjoying the hell out of it and couldn’t contain my grin any longer.
Suzi’s laughter was a burst of relief. “Yeah, well … call it admiration from afar. I was–am–attracted to you,” the shyness in her admittance was cute.
I settled comfortably in the bucket seat thinking that my birthday was turning out pretty damn good.
“I envied you for the group of friends you had goin’ on, too,” she continued, adjusting her rear-view mirror unnecessarily. “Wished I could be part of something like that. You guys all seemed very comfortable and tight; feelin’ comfortable in high school isn’t easy, you know?
“You guys were always havin’ fun: you, Tim, Kirk, those other two guys, and of course–oh, gosh! I love this song,” she shrieked suddenly, cranking the volume up as “Iris” began playing.
I suddenly felt like a rod had been shoved up the middle of my back. I hated that song, if only for being released three years too late. I took the liberty of turning the volume back down. “So, where is it you’re taking me?”
“Duck’s Misery,” she cast a devilish smile at me. “Ever been there?”
I turned to look out at the passing scene with heavy footfalls stomping standstill in my head. I was certain it was Launcelot who had said “ … truth will out,” but I was hearing “ … past will out”–it was in that moment I realized the two were pretty much one and the same.
It had been Ella who first took me to the isolated marshland, four years and a day ago that very day. Encircled by an oak and hickory wood about ten miles outside city limits, the swamp might as well have been on the moon for all I had known of it. Ella had been one of the mains in “that group of friends.” She and Tim had grown up together–Kirk, too, for the most part when he hadn’t been chasing the next best trend. I had arrived on the scene during the summer before ninth grade when my family relocated to their old hometown from across the country.

Ella was the kind of person where you secretly spend some of the time wondering if they’re a phony and the rest a mite daunted knowing they’re not; she was that cool girl in your life, and the younger you encountered her the more eternal everything was made.
Affable, fun and witty, she was liked by many but it had been Tim and I who got to know her best. To be fair, I couldn’t honestly say that anybody really knew Ella–Tim put it best, calling her “unknowable”–but we became well-familiar with each other’s inner workings and antics; Ella and I could even share and joke about some of our more intimate exploits together. Coupled with the fact that Ella was a bit too tomboy for me, these things meant that I’d been able to fully enjoy having a best friend in this amazing girl without the worry of my dick getting in the way.
Then she took me to Duck’s Misery the day before my eighteenth.