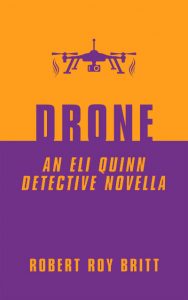 A brazen assassination attempt on an Arizona politician looks unsolvable. The weapon was a drone, and the pilot has carefully covered his tracks. Private investigator Eli Quinn takes the case when his friend, lawman Jack Beachum, suspects the sheriff isn’t investigating rigorously.

With three suspects on his list, Quinn pieces the case together with the help of reporter Samantha Marcos, a good friend who is quickly becoming more than that. Quinn also needs back-up from his dog, Solo, the world’s greatest K-9 private eye.

As Quinn and his team close in on the suspects, he must use all his fighting skills to stop a threat more sinister than he imagined.

What Inspired You to Write Your Book?
After a quarter century in journalism, and a couple stabs at fiction, I found myself out of a job. It’s scary, but I had to look at it as an opportunity. The inspiration for Drone came from having owned a drone myself and having written about them for a sci-tech publication. When I first flew a drone and looked down on myself from a camera 100 feet in the air, I thought, “Uh-oh.”

How Did You Come up With Your Characters?
Eli Quinn is a character that’s been in my head for nearly 20 years. He’s a former reporter (something I know a lot about) who becomes a private eye (a fiction genre I love to read) a year after his wife is murdered (something I can’t imagine, but then, I did imagine it). Oh, and he’s a bit of a wise-ass—that’s probably the one trait we share. Mostly, I wanted to get inside the head of a character who was sharper than I, who could kick ass in a fight, and who’d do good things. Quinn evolved based on my desires. His love interest and sidekick, Sam Marcos, also needed to be tough and smart. They complement each other. Quinn’s best friend, Jack Beachum, was modeled after an older gentleman in law enforcement who I’ve seen in action, a guy I don’t know but who just struck me instantly as, well, a character. Solo, the world’s greatest K-9 detective, sprang easily from my love of dogs and a favorite German shepherd I once had. Quinn needed a dog to help him get through the death of his wife.

Book Sample
I turned to Sam. “You and Solo got the guy in back. You don’t need to get close enough for him to see or hear you. Just turn Solo loose. You know the command?”
“I got it,” Sam said.
We discussed the timing, how it all might go down relatively peacefully under Plan A or, if needed, the dramatically less peaceful Plan B. We quietly went over the bird signals Beach would make. They’d be fishy sounding, but we just needed a few seconds to enact the entire plan.
“They’ll all have guns,” Beach said, pulling his out of its holster, clicking the safety off.
“You have a gun,” I said.
“You two don’t,” he said.
He reached into his boot and took out another pistol, tried to hand it to Sam. She declined. “I’ve got Solo,” she said. “And I don’t know how to use one of those anyway.”
He tried to give the gun to me. I shook my head firmly. He shook his, resignedly.
“Goddamn karate cowboy,” he said.
“Taekwondo,” I whispered. “Let’s go.”