You are here: Home / Bargains and Freebies / Bargain Books Under $3 / DREAMer by Emily Gallo 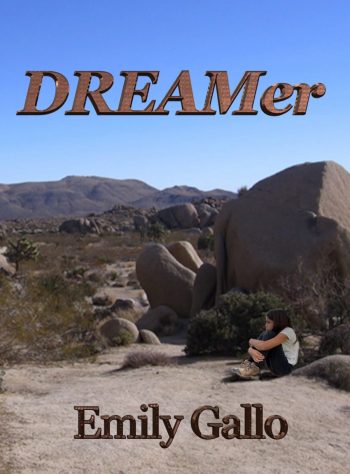 Kate and Lawrence drive through the desert on their way home from vacation and find a young girl sitting by the side of the road. Who is she? Where is she from and where is she going? Why is she there? When and how did she get there? What can they do to help? The girl won’t speak, but that doesn’t deter them from embarking on a journey through central and southern California to find the answers.

What Inspired You to Write Your Book?
I was inspired to write DREAMer because of all the issues surrounding the children taken from their parents at the border and the ridiculous conversation about building that wall. Specifically, I have a teacher friend who had gone to teach at a school for these kids in Tijuana, and her stories about what she witnessed there were heartbreaking.

How Did You Come up With Your Characters?
I had a student when I was teaching in Sacramento whose name was Marisol. Her family had escaped from Mexico and the whole family lived in a garage. I based the main character on her. Kate and Lawrence, the couple who found her, were characters from my book, Kate & Ruby and I like to write books with characters from my previous books.

All rights reserved. No part of this book may be reproduced in any form or by any electronic or mechanical means, including information storage and retrieval systems, without written permission from the author, except in the case of a reviewer, who may quote brief passages embodied in critical articles or in a review.

Trademarked names appear throughout this book. Rather than use a trademark symbol with every occurrence of a trademarked name, names are used in an editorial fashion, with no intention of infringement of the respective owner’s trademark.

This is a work of fiction. Names, characters, places, and incidents either are the product of the author’s imagination or are used fictitiously, and any resemblance to actual persons, living or dead, events, or locales is entirely coincidental.

Enormous gratitude to my stellar editors, Daniel Nauman and Chris Saur, for always knowing the better way to say it.

Thanks also to my audio producer and cover creator, Glenn Tucker, who has tech savvy as only one of his many talents. Thanks to his granddaughter, Zolie Judge, for allowing me to use her image on my cover.

Thanks to my husband, David Gallo and my friend, Rafiki Webster, both of whom not only give me great advice, but also have to listen to me spew out my crazy ideas.

Thanks also to my assistant, Christopher Barboza, who has brought me to a whole other level of marketing and publicity.

Much appreciation to Cindy Triffo and Lorie Leonard for their expertise with the Spanish language.

And as always, I want to thank Tin Roof Café for providing me a place to write with my endless cups of Earl Grey tea.

Other novels by Emily Gallo:

Emily Gallo was born and raised in New York City and now lives on two and a half acres in northern California and in 750 square feet on the beach in southern California with her husband David, their Schiller hound Gracie and their rescued cat Savali.

"The future belongs to those who believe in the beauty of their dreams."

It was pitch black and still hot, even though it was the middle of the night. His snoring had been loud and incessant. She knew he had drunk himself into a stupor and wouldn’t hear her. She was scared, but she was more scared to stay. She didn’t know what she would find, but it couldn’t be worse than this. She was so thirsty and tired, but she had to keep running. She had to keep hoping. It was all she had. Dawn would come soon and it would only get even hotter. She didn’t know how much time had passed, but she had to keep going. She was so tired . . . so tired . . . Maybe she could stop running and walk now. There were no big trees to hide behind, but she saw a rock formation she could climb into and rest. As she settled into the crevice she heard the coyotes. She felt somewhat protected in this niche, but then she heard the rattle. She jumped up. It was still dark so she couldn’t see the snake, but she heard it loud and clear. She was afraid she would step on it, but a bigger animal might attack her if she climbed out. There was no choice but to keep running. The coyote’s howl seemed further away than the snake’s rattle. She kept her eyes on the ground, checking for the snake. It sounded closer and closer and finally she saw it, coiled, its fangs bared. She screamed and ran the other way, but then thought it would be better not to run. She started backing away slowly, her eyes never leaving the rattlesnake. She found some soft sand under a bean mesquite. She wanted to sleep, but she was too afraid. Her eyelids got heavy, though, and she did doze off. She awoke when it got lighter and lighter and hotter and hotter. She wanted to find some shade, but knew that there was little chance of that. She stopped hearing the nighttime sounds of the wild animals and she turned around and walked briskly. She happened upon a road so she stopped and sat down next to a large rock. She was too tired and too hot to run anymore. She didn’t know where she was, but she had to rest and she hoped that the animals and snakes would stay away from the road. She had no idea what lay before her, but she knew this was her only chance . . .

KATE BRUSHED BY LAWRENCE AFTER HE UNLOCKED THE HOTEL ROOM DOOR AND SHE FLOPPED ON THE BED. “What a gorgeous place!”
“The hotel?” Lawrence asked dubiously. “I mean it’s fine but I wouldn’t call it gorgeous.”
“No, Anza-Borrego.”
“Oh, yeah. I knew you’d like it. But you don’t want to be here in the middle of summer.”
“I was afraid the desert would be hot even now. The guidebook said the best time to visit is October to April.”
“It is October.”
“Yes, but it’s the beginning of the month. Anyway, I want to come back in the spring when the wildflowers are blooming.” Kate took out her phone and started scrolling through the pictures of the state park. “I liked Slot Canyon the best. What about you?”
“I kind of liked the metal sculptures.”
“Well, this has been a fabulous day. I really needed to get away from LA and this was perfect. And I found us a nice restaurant in town.”
“Okay, but I want to shower first.”
“Go ahead. I’ll shower after you. I almost wish we were staying another day,” Kate mused as she continued scrolling. “There’s a lot we didn’t see.”
“We’ll come back in the spring,” Lawrence called over his shoulder as he entered the bathroom. He stopped and turned around. “Hey there’s a nice big shower in here. You could join me.”
“Yes, I could.” She jumped up and swatted his rear.
“Hey, you! Act your age.”
“Why?” she asked as she pulled him close. “Just because we’re on Medicare doesn’t mean we can’t have a little fun.”
Lawrence grinned at her. “I wonder if we would still be getting wet together if we were married for forty years instead of four.”
“And we haven’t even been together through all those four years,” she murmured, kissing him. “With me in the Peace Corps and all.”
“I know,” Lawrence sighed. “It feels like we lost a couple of years. And we don’t exactly have years to lose.”
“We’ll make it up,” she said, pushing his tee shirt up over his satiny ebony skin. “Right now.”
The lovemaking that started in the shower continued into the bed and they finally set out for the restaurant an hour later. “What’s the name of this restaurant?” Lawrence asked.
“Coyote Steakhouse.”
“Steakhouse?”
“I know,” laughed Kate. “But they have seafood and vegetarian dishes.”
“Can we walk to it?”
“Yup. That’s one of the reasons I chose the Palm Canyon Hotel. It’s close to everything in town.” The sky glowed gold and coral behind the silhouette of the San Ysidero Mountains as they walked to the restaurant.
They were seated promptly and ordered a bottle of wine while they waited for their food. “What time do you want to get going tomorrow?” Lawrence asked. “Check out is probably not til 11, but I thought we could check out early and see a bit more of the park before heading home.”
“That sounds like a good plan,” Kate replied. “We could check out by eight and leave the park right after lunch.”
“That should give us time to meander our way home and check out some of the places on the way.”
Naturally Kate consulted her phone. “There’s the Hale telescope at the Palomar Observatory. Have you ever been there?”
“No. Where is it?”
“It’s on Mount Palomar. It’s run by Cal Tech but open to the public.” Kate checked the map on her phone. “It looks like it’s about an hour and a half or so from here, off Route 76.”
“I thought we would take Route 78 home.”
“Well, that’s the point, isn’t it? Take our time and meander on some back roads?”
“I wasn’t complaining,” Lawrence shrugged. “It would be more fun to go home a different way anyhow.”
“Would you want to stop at some wineries in the Temecula area?”
Lawrence shrugged again. “If you want.”
“Let’s play it by ear,” Kate said definitively as she shut down her phone. “Let’s just enjoy our dinner and take a walk around town and check out some of the art galleries.”
After dinner, they ambled down the streets of Borrego Springs, but found the galleries already closed for the day. They dallied at the brightly lit display windows and discussed the merits or lack thereof of the art they could see and then made their way back to the hotel.
They checked out early the next morning and were again at Anza-Borrego State Park visitor’s center when it opened for the day. After a hike through Palm Canyon and Font’s Point, they wound up back at the visitor’s center at noon and bought a couple of protein bars. “I’m sure you noticed how desolate it is around here,” Lawrence said. “We might not find a place for lunch for quite a while. Would you rather eat here in Borrego Springs before we leave?”
“Let’s get on the road,” Kate replied. “These protein bars will hold us for a while.”
“It’s hot now down here, but I bet it’s going to be cool on the top of Mount Palomar.”
“I’ll leave our jackets in the back seat just in case.”