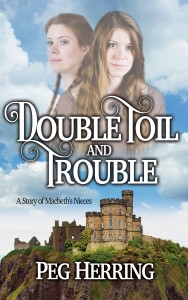 Scotland’s King Macbeth has been dead for a decade, yet his legacy changes forever the lives of his twin nieces, Jenna and Jessie macFindlaech. Viking raiders on a blood feud come to their home in the Cairngorm Mountains, intending to kill all males of Macbeth’s line. Finding only female descendants in the clan-hold, the Vikings declare they will seek out the older sister, who has two sons. Knowing she must somehow warn Tessa, Jenna escapes the marauders. To her horror, the Vikings take Jessie with them as a hostage.
The girls must learn to live without each other, outside the world they’ve always known. It’s especially hard for kind-hearted Jessie, whose lameness makes her doubt her own worth. Jenna’s anger keeps her going, rage at the Vikings who ruined her peaceful life and, she fears, have killed her beloved twin. She refuses to believe any Northman has the tiniest spark of good: not the deformed vitki fortune teller called Aldis, and definitely not Lukas the Tracker, whose merest touch makes her feel weak in the knees.
Jenna’s path takes her to England and then France, where she meets William of Normandy just before he leaves to conquer England. Jessie stays in Scotland, pursued by Viking Bjorn Bear-Slayer and protected by a kind man who sees her as a burden laid upon him by a benevolent priest.
As each sister copes in her own way, love interferes with their intentions. In both cases it’s love that cannot be expressed, love that’s too irrational to ever be returned. Each girl struggles to put her emotions aside, but their hearts don’t know how. The attempt only leads to Double Toil and Trouble.

What Inspired You to Write Your Book?
In 2007, I published a book called MACBETH’S NIECE. It did well, but another story, related but not really a sequel, kept coming to mind. I wrote it down then put it aside. By that time I’d begun writing mysteries, and I was really busy with them. Recently a family member brought the book up, saying she’d always liked it and asking when it would be published. I decided to take a look and found that I like it, too, so I hired an editor, did some reworking, and put it all together.

How Did You Come up With Your Characters?
I was a high school English teacher, so I feel like I knew Macbeth “back in the day.” The idea of his remaining family seemed like fun. How were they treated after the king died? They were innocent of his crimes (if he really did them), but people don’t always accept that. Jenna and Jessie are young, but they have to find the courage to face life and all its ups and downs. They find that family is a person’s strongest connection–well, family and love!