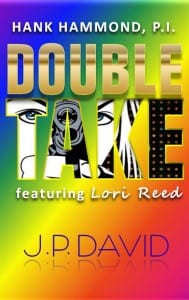 ONE DEAD BODY? That’s almost expected when you’re in the private eye biz. But when a second one pops up in even more bizarre circumstances it’s enough to make even Hank Hammond, P.I. do a DOUBLE-TAKE . . .

As the newest private investigator in Kingston Beach, Hank Hammond has all the signs of success that he could possibly ask for: the latest detective gear, a shiny red Corvette, an office within a successful attorney’s building, and–most importantly–the professional services of Lori Reed, a brilliant and beautiful executive assistant.

If only Hank had a client.

Enter a cantankerous millionaire. And enter a collection of murderers, thieves, embezzlers, and other assailants including body-building twins and the local police department, all wanting a piece–or preferably pieces–of Hank.

I can neither confirm nor deny that I write under the name of J.P. David as a condition of my participation in the Federal Witness Protection Program. What I can say is that I write in a small mud adobe building set back from a dirt road on the outskirts of a city in a western state, that I am currently working on TRIPLE THREAT, the second book in the Hank Hammond P.I. series featuring Lori Reed, as well as on a suspense thriller. Both of these books will be released in the near future.

I can also confirm that I have been employed in various assorted positions in more than three, but fewer than thirty states and that I have never technically been incarcerated unless you count the time I served in the vice principal’s office in Junior High.

EDITOR’S NOTE: In addition to the information above, J.P. David is a graduate of the California State University at Long Beach with a degree in creative writing, and has a business background that includes supervising a staff of investigators much like Hank Hammond, P.I.. He is a former general coordinator of a Mystery Writers of America satellite and has been a presenter at both Left Coast Crime and Bouchercon.

J.P. resides with his camera-shy wife and his dog (lower left) in a rustic mud adobe home that is frequented by coyotes, deer, javalenas, rabbits, squirrels, snakes, gila monsters, bobcats, and the occasional human. He is an active volunteer in the community, with a particular interest in health and caregiver issues.