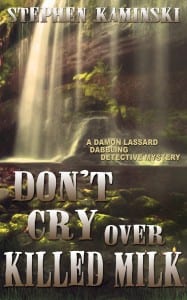 Jeremiah Milk lived a life filled with emotional extremes. Amniotic band syndrome—a congenital condition—left his fingers and toes malformed. Ridiculed as a child, he became an adolescent hermit. As an adult, Jeremiah’s wounds healed when he landed a position as a park ranger and married a woman who loved him despite his physical appearance. But fate ripped his life to shreds when his wife and infant son died on the same night in separate calamities. Shortly thereafter, the tides turned once more as an act of Jeremiah’s ostensible benevolence translates into a financial boon. The book on Jeremiah’s life closes without mercy when he’s found murdered at Tripping Falls State Park.

Damon Lassard—Hollydale’s loveable civic leader, amateur sleuth, and Jeremiah’s neighbor—springs into action. He’s obstructed by a prickly lieutenant, but wriggles information unknown to the police from a colorful bevy of suspects. Aided by his best friend Rebecca and his reluctant ally Detective Gerry Sloman, Damon engineers a deep dive into Jeremiah’s past to solve the crime. Along the way, Damon strengthens his relationship with the breathtaking Bethany Krims, cracks a local horticultural mystery, and tries in vain to tame his wickedly sarcastic mother.

What Advice Would You Give Aspiring Writers?
Never give up writing if it’s what you love.

Author Bio:
STEPHEN KAMINSKI is the author of the Damon Lassard Dabbling Detective series published by Cozy Cat Press. The first two cozy mysteries in the series are “It Takes Two to Strangle” (2012) and “Don’t Cry Over Killed Milk” (2013). Stephen is a graduate of Johns Hopkins University and Harvard Law School. He has practiced law for over a decade and currently serves as General Counsel to a national non-profit organization. He is a lifelong lover of all types of mysteries and lives with his wife and daughter in Arlington, Virginia.

“It Takes Two to Strangle” is the winner of the 2012 Reader Views Literary Award (Mid-Atlantic Region).