You are here: Home / Fiction / Romance / Disobedience by Alvania Scarborough 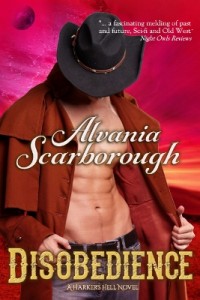 Early settlers thought they’d found a western re-creationist’s heaven.
Instead, the new world is a hellish version of the Old West.
Now the seeds of long-ago conflict are stirring to life.

Dissonance Walker believed she’d seen the worst life had to offer, only to find she’s dead wrong. Sold to a secret organization by her parents for the price of a new stove, her ability to disobey is ripped away by a brutal experiment. Determined to find the key to restore her freedom, she manages to escape her captors, only to end up in the worst place for a woman that can’t say no—on a saloon stage, ready to be sold to the highest bidder.

Bram Spencer is sure the heat has baked his brains. With his friend murdered and his ranch under attack, he needs to attend a little unfinished business. Buying some fool woman because she pokes at scabs he thought long healed, isn’t on the list. It’s bad enough he has to go through the fuss of rescuing her, now he discovers the only way to grant her freedom is to marry her. This is why he never plays the hero—no good deed goes unpunished.

What Inspired You to Write Your Book?
I had an opening scene come to me of a bounty hunter buying a woman to save her, only to discover he couldn’t just set her free. I knew the setting was Old West, and that it took place on another world.

How Did You Come up With Your Characters?
My characters come to me almost fully developed. I know how they’ll react or what scars they bear when it is time for me to write the scene.

Book Sample
From the lost journal of Harker Shand Delais

Judge.
Jury.
Executioner.
I created bounty hunters—and gave them absolute power.
~ * ~
Dear Lord, she felt dirty. Hadn’t felt clean in weeks. She wanted to jump in a tub of hot water and scrub and scrub until all the filth, all the madness of the last few months washed away.

There wasn’t enough water in all of the Territories to do the job. Certainly not enough to wash the memories from her head.

That didn’t mean, however, she was going to hang that head like a beaten dog.

Dissonance Walker stared up at three of the biggest and meanest looking men she’d ever seen in her entire life. But it was the man holding her close that her gaze kept coming back to. The moment he’d stepped into the saloon, he’d drawn her gaze like iron filings to a lodestone. She’d thought him a gunslinger with his dark hat pulled down low so it shaded his eyes, and cheekbones all hard, sharp angles. And his mouth. Mercy, his mouth. Chiseled lips, not too full, flattened into a grim line. He looked as if he picked his teeth with the bones of his enemies.

And, unlike the other men filling the saloon, he hadn’t stared at her with lustful greed. Such a small thing to base a decision upon, but she had. She’d leapt on that small sign he was different and clung to it like a lifeline. It was foolish in retrospect, but she’d been so certain he would help her escape.

She hadn’t counted on him buying her.