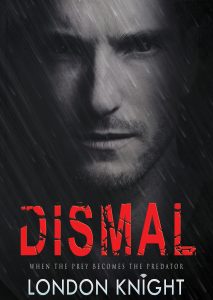 Dr. River Michelet is more than meets the eye.

After a family tragedy, he relocated to South Bend, Indiana and leaves the criminal psychology field to work with teenage boys who suffer from psychological disorders. Despite the difficult transition, River’s apprehensions quickly vanish as he realizes he can be an asset to these young men, but at what cost?

While struggling to maintain his sanity, he chases the American dream—the pretty wife and the picket fence—but behind the curtains lies another reality altogether…

While a part of him excels, another aspect of him unravels. Secrets, lies, neglect, and hatred lead to him tapping into the darkness within and unleashing his inner monster.

His motivation is simple: When karma doesn’t do a good enough job, Dr. River Michelet steps in to serve a bit of street justice. Welcome to South Bend, Indiana, where the people are nice, the accents are Midwestern, and the killers are the ‘boy next door’…

What Inspired You to Write Your Book?
I enjoy writing about the underdog being victorious.

How Did You Come up With Your Characters?
I enjoy delving deep into character development. I thought of a hero and as I wrote the story, he grew and morphed into more than I even imagined.

Book Sample
An unfamiliar noise had caught his attention — the sound of scratching and clawing against a wall. He scanned the space around him, but nothing seemed out of place.
All he could hear was the low hum of the refrigerator, the slight creaking of his feet against the wood of the floorboards, and his own breathing. As he switched on the kettle, prepared to dismiss this as a figment of his imagination, he heard the noise once again, and immediately glared at the front door. A small shadow appeared at the other side of the threshold –an unholy blackness, the kind that gave him palpitations. Taking careful steps towards the front door, he watched as the shadow stretched, grew, then shrank down, like some slinky manipulated by invisible hands. The scratching noise intensified, then paused, then started up again, even more aggressively as he neared. In an instant, it was gone. His eyes flashed in the direction of his kitchen.

I should get a knife … or run upstairs and get my gun. I know how to shoot the damn thing. Wait a minute; what the hell is wrong with me? It's probably nothing. I'm losing my mind.

The wind had been kicking up quite a bit; in fact, a wind advisory was in session. Yes, it must've been the air whistling and moving about, causing a ruckus against his door. Perhaps a broken twig that had drifted over from some nearby brush, or an old tin can batting against the doorframe.

"You're being stupid," he mumbled to himself. "There's no boogie man. There's a plausible explanation for this."

He maneuvered his way closer as if he were about to let in an old friend for a day of fun and excitement, forcing a grin, shoving himself through the discomfort and fright. Thrusting his face flush against the door, he looked through the eyehole. Nothing. All he could see was his empty front yard. No broken tree boughs, debris or roving trash. He stepped away from the door, his mind racing with uncomfortable possibilities. Then there it was again. The scratching, the shadow…
"All right, who is it?"
Silence.
But the shadow at the base of the door remained. And the scratching of the wood on the other side of that wall continued, too…