You are here: Home / Fiction / Fantasy / Destiny by Shannon Pemrick 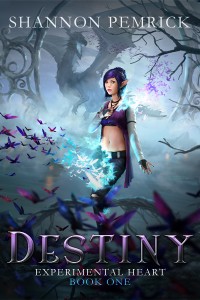 “…Do you know what it’s like to kill without regret?”

Eira only knew one thing in life–to kill. Designed to be an emotionless killing machine of war she had no desire to be a puppet of another’s master plan. Escape was the only option. A normal, free life was the only goal. Labeled as a failure, she took the opportunity to run and was hunted. But destiny had other plans.

“…Do you know what it’s like to kill without being able to feel?”

A fateful mistake throws her in the path of a mysterious dragon, who makes an offer that is hard to refuse. Accept his help to gain her desired freedom or keep running with an eye over her shoulder.

But, can she really trust him?

What Inspired You to Write Your Book?
The book idea came from two events: a creative writing assignment and listening to the song “Away” by breaking Benjamin. The assignment had me creating a short story with three characters and the song gave me an idea of how my protagonist and deuteragonist’s relationship should go. In the end, when the assignment was completed, I loved it so much I expanded on the story. This choice ultimately changed the original idea drastically, resulting in the relationship of the protagonist and deuteragonist to evolve into something much better than I had originally planned, as well as the world I had created.

How Did You Come up With Your Characters?
My characters were created based on personalities I desired. The protagonist, I needed someone who was broken and didn’t have much left to fight for but still fought regardless. This fight would create a strength in her she didn’t see, but others did. It also created a stubbornness in her. I felt, based on her species enhancements, making her female would be the best choice as it would create a more dynamic character. My deuteragonist had to be male if my protagonist was female. Based on the idea I had for the story, it was the only way it could work. I also needed this character to be able to balance out her broken nature, and be capable of helping her along the way, while also having an air of mystery to him.

Book Sample
I nearly jumped out of my skin when something cold and wet touched my arm. I whipped around to defend myself, but stopped mid-swing when the gray wolf behind me flattened his ears and backed up. By his feet was a carbine, and strapped around his body were ammunition cartridges.

He shifted and held up his hands. “I didn’t mean to sneak up you.”

I sighed with relief. “You have got to be more careful. If this had a bullet left I would have shot you.”

“Sorry,” he repeated. “I just thought you’d want the weapon Ryoko picked for you. I even have extra ammunition for you.”

I picked up the loaded carbine and unloaded a round on the military in the street. When my magazine was empty, I pulled back so I could reload. “So tell me, why did you leave the spot I ordered you to stay in?”

“You told me not to die so when my alley was overrun, I figured it’d be best to get out of there,” Raikidan replied after I unleashed half of my second round. “I went searching for Ryoko at that point, since I figured you could use the weapon she picked out for you. I was able to get a good view from the sky from time to time, so I also gave position information to our side.”

“Smart moves. Learn anything while you were doing all that?”

I laughed far harder than I should have, stalling me from unleashing the last half of my magazine. “Well at least you learned that. Far too many others are still learning.”

He watched me as I fussed with my carbine, and insulted it when it jammed. He found it mildly amusing, but was otherwise useless, not bothering to give me a hand. I really wished Ryoko hadn’t given me this particular weapon. We all had our own preferred weapons, and extras just in case, and she had grabbed the wrong carbine. Mine was better taken care of, and would have had less chance of this happening.

Everything happened so fast. He pushed me. A gun went off and he yelled in pain, and I pulled an ember from my lips and tossed it at our attacker. She dropped her weapon and screamed as her skinned burned, but I had more important things to focus on. Raikidan was leaning against the wall clutching his shoulder, blood running down his arm.

“Let me see,” I ordered as I reached for his arm.

Raikidan hesitated, but then revealed a large nasty gash, going from his upper arm to his shoulder. I sighed with relief. At least the bullet had only grazed him. This was easier to deal with than a full bullet wound.

I started ripping my shirt. “We’ll have to get you stitched up when we get home, but this will help with the bleeding.”