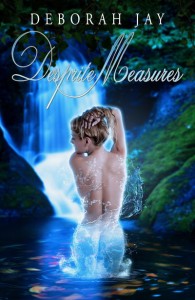 On the surface she’s a cute and feisty blonde; a slender pocket rocket fitness coach. But Cassiopeia Lake has a secret; she’s really a force of nature – an elemental.
Water sprite, Cassie, has lived undisturbed in her native Scottish loch for eons. Now, one encounter too many with modern plumbing has driven her to live in human guise along with her selkie boyfriend, Euan. It’s all going fine – until a nerdy magician captures Cassie to be an unwilling component in his crazy dangerous experiment.
Escape is only Cassie’s first challenge.
She’s smitten by her fellow prisoner, the scorching hot fire elemental, Gloria. But how do you love someone you can never touch?
And what do you do when your boyfriend starts to hero-worship your persecutor? Not to mention that tricky situation of being the prize in a power contest between two rival covens of witches.
So when Gloria’s temper erupts and she sets out to murder the magician, can Cassie keep her loved ones safe from the cross-fire, or will she be sucked into the maelstrom of deadly desires and sink without trace?

What Inspired You to Write Your Book?
I’m an urban fantasy fan, but I’ve grown tired of the regular character types: vampires, werewolves etc., so I was looking for something different, and hit upon the idea of modifying a character I’d already created for one of my epic fantasy novels – a water elemental.
The setting resulted from my love of the Scottish Highlands, where I am lucky enough to own a home, and the theme of environmental and ecological issues, is one that I am passionate about.
Combining these three has proved to be a joy, which has made writing this series a great pleasure.

How Did You Come up With Your Characters?
Originally, I introduced a water elemental – a sprite – as a mischievous and morally dubious character in my epic fantasy, The Prince’s Man. She struck a chord with many readers, and stayed in my mind long after the book was published.
When I came to write an urban fantasy, she was too good a template not to explore further; Cassie is immortal and not human, allowing me to explore a very different approach to world-wide issues, yet as she has to interact with the humans around her, she needs to learn about them. Fodder for many interesting scenarios.
Many of the human (and non human) backing cast have snippets of personalities from people I’ve known. I’m saying nothing more, for my own safety!

Book Sample
I paused. Was Liam the threat I was making him out to be? Thought of him made my stomach lurch south, down into my pointy-toed cowboy boots. Yet I’d seen no sign of him since that awful day.
The strong scent of strawberries washed over me, and I froze. Strawberries? In the forest, and at this time or year?
My breath caught, and a total absence of sound crashed against me. I scanned my surroundings and cursed the inconvenience of two forward-facing eyes. I felt very small; a rodent caught by the gaze of a hawk. The silent trees towered threateningly over me and my heart began to pound.
Into this void sneaked a tiny, repetitive sound—the shallow, quick breathing of an excited human.
Liam!
Stupid, stupid sprite!
I’d let my nose lead me into trouble. Again.
If the coven was my one means of tracing Liam, then the reverse might also be true.
I ducked, and started to run like hell.
Liam was between me and the house, but there lay safety. He wouldn’t try to take me in front of so many witnesses. Would he?
I needed to circle around him, and chose speed over stealth, pretty certain he would find me with magic if I delayed. Pinning my hopes on catching him by surprise, I pounded towards my goal. My footfalls sounded hollow on the compressed heather and shed pine needles underfoot. Twisting and turning along faint animal tracks, my clothes snagged on gorse and broom, hair catching in trailing branches until I caught sight of the front gable of my sanctuary.
Whereupon I smacked headfirst into a magical barrier.
With a loud squeak of shock, I bounced backward and hit the ground, measuring my length on the springy heather. The back of my head cracked against a protruding boulder and a shower of stars sparkled across my vision. I lay there for a moment, stunned. If I’d been human I might have been knocked out rather than just shocked, but the pain was real all the same. For the first time, I truly appreciated that I couldn’t have the pleasure of which this body was capable without the converse too.
Liam crashed towards me. Despite the stilettos stabbing inside my head I found in that light-bulb moment yet another facet of human drive—the survival instinct. Almost of its own volition, my body scrambled to unsteady feet. I put a hand out to the nearest tree trunk and dropped some of the cohesion binding my human form. The pain lessened.
If Liam believed I was going to be easy to capture this time, he had another think coming.
“Ouch!”
A sizzling bolt of energy shot through the air where my body had been a fraction of a second earlier, passing almost without effect between my more widely spaced molecules. The same could not be said for my blouse, which now sported singed holes back and front. It stung, but my human body would have been stunned. I bolted in the opposite direction, zigzagging. I had no idea what Liam was capable of, and no wish to find out.
Another bolt zapped into a tree trunk, spitting splinters of wood in a shower that passed harmlessly through me, although some snagged in my clothes. Optimistic I would escape after all, I slammed into another of his barriers. Invisible but impenetrable, not even separate molecules were going to pass through. As I scrambled upright it nudged me, herding me towards wherever it was Liam wanted me. He couldn’t be far away; I could hear him coming, reacting like a spider to vibrations in its web.
I dropped my remaining cohesion. My clothes fell into a heap on top of my favourite cowboy boots and I took a scant moment to shift them beneath a broom plant. Liam might spot them but with no better hiding place on offer, what choice did I have? Now I was no more than a blur to the human eye. Liam might know I was in the vicinity and he might even have spells that could find me, but I was going to make the bastard work for it.