You are here: Home / *Reading Room / Buyer's Guides / Death Of A Temptress by P.F. Ford 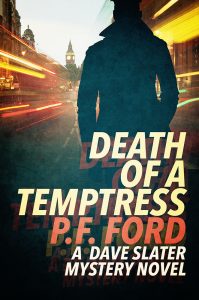 Death Of A Temptress by P.F. Ford

DS Dave Slater is suspended from duty. The injustice of taking the rap for a fast-track London detective’s botched investigation hits him hard. To add insult to injury, his boss hands him a closed case for a discreet re-investigation. Is this a chance to redeem himself or a way of ensuring he fails?

Ruth Thornhill went missing six months ago. According to the evidence, she ran off with another man, so the Met closed the case. However, Ruth’s sister Beverley refuses to give up. And Beverley has friends in high places.

Slater’s enquiries soon find inconsistencies in the original investigation, and after a near-fatal encounter with a London bus, he realises the stakes are far higher than he imagined. Someone wants him to disappear.

An unlikely ally, in the form of fellow scapegoat DS Norman Norman, helps him uncover disturbing connections between the missing woman, a Chinese businessman, a glossy magazine, an online escort agency, a top London banker and senior officers from London’s Serious Crime Unit.

The two uncover a mire of corruption, blackmail, deception and possibly the most cunning murder ever seen. The evidence stacks up against one particular suspect and Slater and Norman close in. But, as with most things in Slater’s life, nothing is ever simple.

“If you like your crime with a lighter touch, Death of a Temptress is a refreshing, entertaining mix of mystery and humour that never takes itself too seriously.”

What Inspired You to Write Your Book?
I had always wanted to try and write a novel, but people kept telling me it would be a waste of time, and with that sort of encouragement I just never got round to it. Then ten years ago I met my wife Mary who encouraged my dream to write. First came a series of novellas and then, a couple of years ago, I plucked up the courage to write and self-publish this book, my first full length novel.

How Did You Come up With Your Characters?
In the original novella series I wrote, I needed a police officer for one of the stories, and this is where my main character, Dave Slater, popped into my head. He's based on an amalgamation of British TV police officers but, just to be different, he doesn't have any major psychological flaws. In this first book, he does have a bit of a chip on his shoulder, which he inherited from the old me of about twenty years ago (fortunately I don't have that now!)
Then, when Slater demanded to have a novel about himself, I thought he needed a sidekick. I always loved the character of Norm from the TV series Cheers, and he was the picture in my head when I created Slater's sidekick Norman Norman (his parents weren't very imaginative when it came to names!)

Book Sample
In the dark gloom of the early hours, with lights extinguished, the estate car reversed slowly off the main road into a narrow side-street and then continued to creep on down to the riverside, where it finally stopped at the top of an old, disused, slipway.
A man, dressed from head to toe in black, emerged from the car and made his way stealthily to the back. There was a loud, metallic, pop as the hatch opened, followed by a hiss as it glided upwards. Shocked by the apparent loudness of the noise, he froze and held his breath.
After what seemed an eternity, he began to relax. It seemed no one had heard the noise, so he began the business of removing what appeared to be a roll of carpet from the back of the car. It was roughly six feet long and was bound with string around the middle and over each end.
Somehow it seemed to have grown heavier on the journey and it was much harder to get it out of the car than it had been to put it in. In no time, he was sweating profusely from his efforts.
He eventually gave up trying to carry the carpet and settled for dragging it from the car and down the slipway. In the darkness, he didn’t notice the string was being loosened as it caught and snagged on the rough concrete.
Finally, he reached the river’s edge and there was a faint splash as he dropped the end he was holding into the water. Then he stepped back to the other end, dropped to his knees, and launched the carpet into the river like a torpedo. In the dim, murky, glow from the distant streetlights on the far bank, he could just about see it bobbing along on the surface as it floated out into the river and the current began to carry it away.
He watched with great satisfaction as it began to gather speed and was drawn out towards the middle without sinking. He had thought carefully about this – if it sank too soon it might be visible when the tide went out, so he had taken great care to make sure it floated long enough to reach the middle before it became waterlogged and sank.
He stood watching the slowly sinking package until it was lost from sight in the darkness, then made his way back to the car. After carefully easing the hatch shut, he climbed into the driver’s seat and started the engine. As he crawled back along the lane, the lights of a passing car flashed past, and his confidence began to waver once more.
Not for the first time, he wondered how on earth he had been foolish enough to allow himself to be drawn into this situation. It was like the worst sort of nightmare, but, he also realised, it was too late for regrets. There could be no turning back now.
As the man turned onto the main road and switched his headlights on, the now waterlogged roll of carpet reached the middle of the river and disappeared below the surface, just as was intended.
The tide was in full flow now, and the fierce current had begun to work at the loosening string. Over the next half hour, the roll of carpet was dragged and bumped along the bottom, and in the process, the string was further loosened, and the carpet was almost unrolled.
It was quite possible that, in a day or two, the precious contents within could work loose and be carried away by the tidal current, and from there anything could happen…

For joining the author’s email/newsletter list you will get:
This free book, the next book in the series, and prequel novella that cannot be found anywhere else.