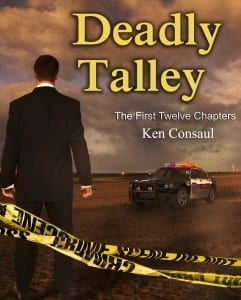 For twelve years on the streets as a sheriff’s deputy, Dean Talley dreamed of becoming a homicide investigator. Four years ago his dedication to the job paid off. Since moving the badge from his shirt to his belt, the dream has become a grim reality of bearing witness to the horrors one person can inflict upon another. The cruelty is wearing him down. The cynicism has turned him into a cop just going through the motions. His commanding officers and fellow investigators can sense the impending wreck. No one wants to be around when he finally flares out. Talley has been assigned to a series of gang and street killings, what management terms ‘misdemeanor murders’. He works alone, attending the crime scenes, filling out the reports, and interviewing the witnesses when they can be found. All he longs for is end of shift and returning to his bungalow at the beach.

That all changes the day his wife, a crime lab tech, becomes the victim of a carjacking and lies in a coma, tied to machines. As Talley sits at his wife’s bedside he resolves to find and punish those responsible. He can’t rely on the courts. He has seen the pitiful victims’ families littering the halls of justice while ambitious prosecutors seek slam-dunk convictions and make plea deals with shady defense attorneys. Careers crawl forward over the grief and outrage of the victims.

Talley is willing to turn his back on the law and what’s left of his career. He balances nursing his wife with his investigation. He creates his own system of jurisprudence. There are no motions, deliberations, or plea bargains in Talley’s court, only the verdict and passage of sentence.

The First Twelve Chapters available here are also contained in the complete work, Deadly Talley. If you wish to forego the sample, search for Deadly Talley.

How is Writing In Your Genre Different from Others?
My earlier work is in historical fiction but I wanted to branch out and try something different. Like Chandler and Hammett, I’ve tried to use the settings more to set the mood of the scene or in anticipation of the action rather than simply paint a picture for the scene to play out in.

What Advice Would You Give Aspiring Writers?
Keep writing

Author Bio:
July 1st marks the release of Deadly Talley, a police thriller. Consaul, in this change of direction from historical fiction, explores the psyche of a homicide detective burned out by homicide and the failure of the legal system to prosecute killers. His ‘enthusiasm’ for the job returns once his wife becomes a victim.

Consaul has long admired the work of Dashiell Hammett and particularly Raymond Chandler. In Deadly Talley, the author is paying homage to the fathers of modern detective fiction. He has chosen The Gold Coast of southern California as his stage, moving south from Hammett’s and Chandler’s turf. Hope you enjoy this first foray into detective fiction.

Consaul is also the author of The Platte River Waltz, a family saga about two young people, their fortunes joined by the tragedy of a cholera outbreak. Together they decide to continue on to Oregon with another party of emigrants. They marry and, at Fort Laramie in Wyoming, hear tales of the discovery of gold in California. They split from their party and form another, determined to make their fortune in the new territory. The book is in two volumes, Orphans in the Storm and The Growler Brigade

What Inspired You to Write Your Book?
Always an admirer of the work of Raymond Chandler and Dashiell Hammett, I decided to move the action into the present day and down the coast to the Orange County Gold Coast. After all, I wouldn’t want to be encroaching on the turf of the masters.
I think Deadly Talley will capture your interest from the first pages and involve you with this conflicted homicide detective