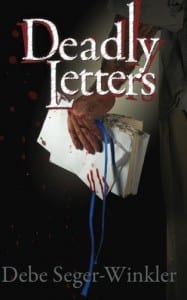 Cindy Royster always chose the wrong men, only this time her choice brings about her death. Letters she and three of her former roommates have been writing to each other causes her killer to seek his revenge on the other women, for what he considers their involvement in Cindy’s ultimate betrayal. Sheriff Robert Collins gets involved and is hot on the trail of the murderer, trying to save the other women from this madman’s wrath. But when Robert falls in love with one of the intended victims, he soon discovers that it’s not easy to stop a killer and keep someone you love safe from harm. DEADLY LETTERS explores the far reaching effects domestic violence can have beyond the perpetrator and the victim’s boundaries.

How is Writing In Your Genre Different from Others?
I love writing suspense, because of all the twists and turns your plot can take. There are often times when I don’t even know how a book will end, till my characters play out their roles and tell me.

What Advice Would You Give Aspiring Writers?
Write. I know it sounds simplistic, but may aspiring writers have come to me and relayed a wonderful plot and when I ask how much of the book they’ve written I often hear, “Oh I haven’t started writing it yet. I’m still working out the details and outlining.” You have to “write” to be a writer! Go ahead, jump in. All the details will work themselves out in the end.

Author Bio:
I grew up in New York and because of an extremely unusual, confusing and abusive childhood, I sought escape by crafting stories and poems to get me through my days. In High School I had a creative writing teacher who took special interest in my work and told me I should think about a career as a writer. Unfortunately, my self-esteem wouldn’t allow me to believe that I had that kind of talent, so I followed an alternate route. I married, had two children, devoted my life to my children and my husband, but eventually divorced. Over the past ten years I have been searching for that young girl who dreamed of being a writer.

I am currently remarried, living in North Carolina and have finally rediscovered my written voice and produced my first novel, Deadly Letters. I am currently working on my second novel, Damaged Goods, which will be based on my childhood.

What Inspired You to Write Your Book?
During my early twenties I shared a small apartment with three other women. One of those women always seemed to date men with violent tendencies. Numerous times we all had to rescue her from abusive situations. Years after we all parted company, I started wondering what ever happened to this particular roommate. I wondered if she was still alive or had she paid the ultimate price for her poor choices with the loss of her life and what if we’d all stayed in touch?.