You are here: Home / Fiction / Horror / Dead Drunk: Surviving the Zombie Apocalypse… One Beer at a Time by Richard Johnson @Dead__Drunk 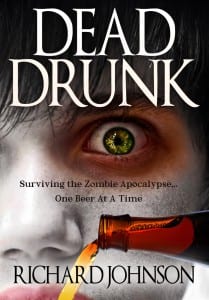 Charlie Campbell was your average, balding, thirty-year-old alcoholic with a dead-end job and a penchant for shambling through life one mistake after another. However, none of that mattered following the sudden arrival of a mysterious sickness that brought with it infected mobs of zombie-like creatures thirsting for the flesh of the living.

Trapped in a Chicago apartment the morning after a raucous bachelor party, Charlie and his old fraternity buddies must battle for survival against the cannibalistic horde, a military invasion and their own rampant stupidity.

With supplies, common sense and brain cells dwindling by the hour, the motley crew — including a racist cop, a Sri Lankan used car salesman, a stoner landlord and a pet raccoon — must pull out all the stops to avoid joining the ranks of the dead.

If you like zombies, action and humor, crack a beer, pull up a barstool, and prepare for one wild ride.

How is Writing In Your Genre Different from Others?
My novel is different from other zombie books because I focus on character development and dialogue rather than repetitive zombie violence. The characters

What Advice Would You Give Aspiring Writers?
Just go for it. Write it, and put it out there.

Author Bio:
Richard Johnson is a writer and small business owner that grew up in Galesburg, Illinois during the 80’s. He graduated from Monmouth College as a double major in History and English, and earned a Masters degree in History with a teaching certificate from Western Illinois University. He currently lives with his growing family in a small town outside of Chicago. Richard is a self-acclaimed expert of the zombie genre after spending countless hours watching B-rated horror movies. He is a good friend, a bad cook, and a terrible dancer. If there is a real zombie apocalypse, seek him out for protection. But bring plenty of beer.

What Inspired You to Write Your Book?
I have been a zombie fan since about the age of ten. Most zombie books and movies simply aren’t that good, and I knew I could do better.