You are here: Home / Fiction / Science Fiction / Daughter of the High Lords and Other Speculative Fiction Stories by David Scholes 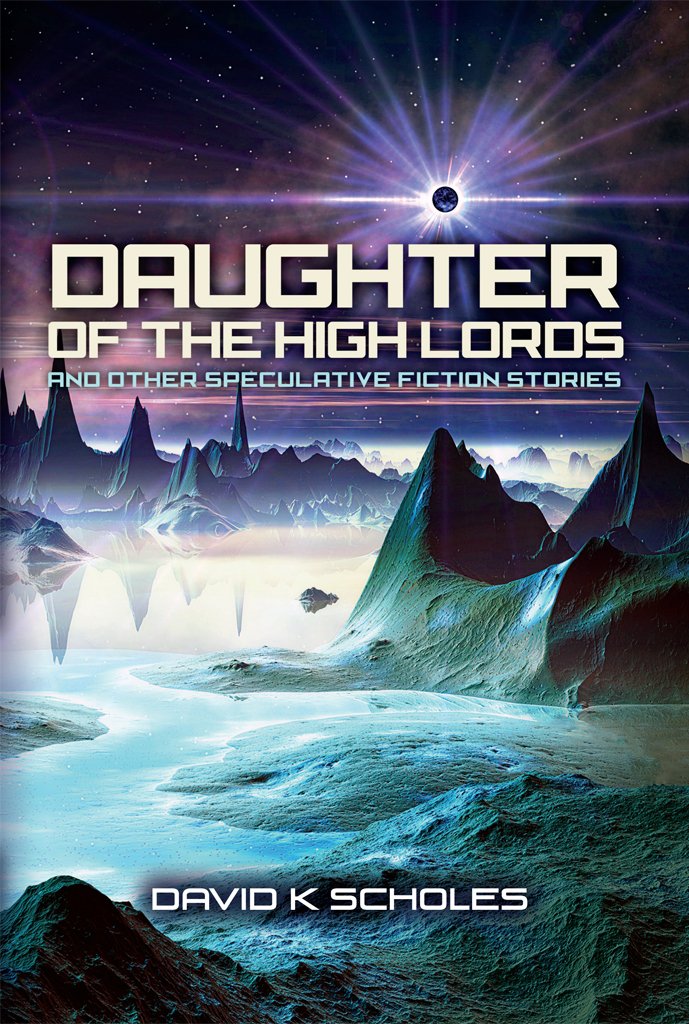 The book comprises a collection of some 14 science fiction and science fantasy short stories.

“Daughter of the High Lords”, pits the High Lord race and the Brell super power empire against the Coordinator of All Realities as Garthhe an enigmatic entity from an equally enigmatic race seeks to rescue, Raechelle, daughter of the High Lords. In “The Search for Humanity” the far flung human race disappears without explanation from the upper reaches of time. By law the fearsome Xelk in “Human Hunter” should not be plying their trade on Earth. Should they?

In Broolt the Universe’s most formidable star trooper is confronted with an Asgard gutted and somehow transported to the other side of the Universe. While in “Grief Counselors” a new firm has something quite different to offer.

Also in “Reality Check” alternate reality travelers coming home must make sure they are returning to the right reality. In “Past his used by Date” older people who have passed their actuarial expectation of life are reported to authorities by watchful neighbors. In “Search Mission” the survivors of an ancient starship crash are a bit coy about being found. And much more.

As an older person some of my stories speculate a little on the plight of future aged persons in societies which are less than friendly towards them.

How Did You Come up With Your Characters?
The main female character in both Daughter of the High Lords and also The Search for Humanity is based somewhat on a person I once knew and respected.

The Trathh character reflected the desire to create an alien character that had been deeply wronged by humanity and yet when it came to the crunch was still prepared to help them.

“You are Raaechelle, daughter of the High Lords?” It was a rhetorical question.
“And you are?” came the haughty response.

Even in her present dire circumstances the young adult female found it hard to refrain from adopting a tone of superiority. Especially as she was not accustomed to treating anyone less than a High Lord or very senior Brell commander as an equal

Yet Raechelle was highly intelligent and ultimately quite pragmatic. She quickly sensed that the superiority approach would be wasted on the human form entity that now stood before her. An entity that had been able to find her here in this obscure nightmare of a reality. When others demonstrably had not. Indeed could not.

Garthhe took stock of the humanoid woman before him. Very tall, almost as tall as himself, and very attractive even for a daughter of the High Lords. Slim at the hips with long athletic legs with her torso leading from trim waist to broad shoulders. It added to rather than took away from her attractiveness. At least to Garthhe and also to most High Lords. She gave the impression of being very physical for a member of a race that was not generally known for their physicality. Thankfully she was dressed in more useful and durable clothing than the usual High Lord robes. Also she wore what appeared to be Brell light armor.
* * *

* * *
Some mischievous part of Raechelle had decided to stretch out and she was running up the stair well of a 3 mile high building using just her impressive physical athleticism. Which didn’t take very long at all.

Garthhe followed her close behind but not too close taking it completely in his stride. The soon to be High Lord ramped up the pace with her exo-skeleton unit kicking in. Garthhe followed at the same distance.

“You did say not to risk their crude inter-floor teleshunt system,” she grinned “and that we would be safer higher up.” The grin dropped away a little when she saw that Garthhe wasn’t even breathing hard from equaling her exertions.

At the top floor Raechelle looked Garthhe over again, a re-appraisal. Slightly taller than her. White haired with an unlined but what she thought of as an “experienced” face. Strangely better looking than any High Lord she knew. Even her betrothed. Yet a hardness accompanied the good looks. A hardness that had seen many things among the realities. There were no obvious signs of exo-skeleton assistance. He may have had something more subtle – perhaps biological implants – or possibly he was simply that fast. Or faster. She did not as yet have any basis for assessing his physical strength but suspected it was on the high side. For some reason she was reminded briefly of the Minimisers – a relatively humble race who only ever used minimum required force to achieve their objectives. A race that others underestimated at their peril. She knew already that she would not underestimate Garthhe.

As Garthhe and Raechelle looked on almost mesmerized by the tracker, first one then a second All Knower arrived. Not through any obvious gateway. One of them with another of the trackers. Neither Garthhe nor Raechelle doubted that more of both were on the way.

“Any suggestions?” asked Raechelle “as something right now would be very opportune.”
“If we knew of a gateway I would suggest we force our way to it and jump if we had time to dial up our next reality destination.”
“Failing that?” enquired Raechelle
“We’ll all get to see how tough you are,” offered Garthhe.
“You too!” responded Raechelle.

“This is where I leave you,” said Garthhe to Raechelle.
The announcement was totally unexpected.
“You are not coming with us to Varseer?” she enquired genuinely upset. “We had hoped to honor you there as you deserve.”

“I do not care for such honors and ceremonies,” stated Garthhe. “You know me well enough now to know that is my way. I can see that this whole adventure has fostered a greater cooperative relationship between the High Lords and the Brell. Something my own race considers vital for the future of the Central Reality. This is all the reward I need. Along with your safe return,” he chuckled.

“Others have need of my services now,” he added almost as an afterthought.

The Tolden starship – also equipped to travel among the myriad realities – moved alongside its Brell counterpart. Ready to take Garthhe on board.

Borothh, newest High Lord, had seen the closeness that had developed between his betrothed and Garthhe and breathed just a small sigh of relief at the enigmatic entity’s final departure.

“What is that you are holding High Lord Raechelle?” the Brell commander enquired. No one, not even Varsheeth, corrected him. Raechelle’s elevation was only a question of time – very little time indeed now – jut a formality – and in the Commander’s view – she had already earned it. Well and truly.

Garthhe gave it to me before he left,” she said “an artifact that he took from the Drorn station we visited in the world megalopolis reality.”

The Brell commander took a closer look at the artifact.

“Do you think it might have helped us on our return journey? A sort of ancient talisman?” Raechelle enquired.

“Who can say?” the Commander replied “the Drorn pre-date even the Coordinator of Realities himself. With them anything is possible”

“I will present it to the First High Lord.”

Yet even as she said it Raechelle’s thoughts were of Garthhe.