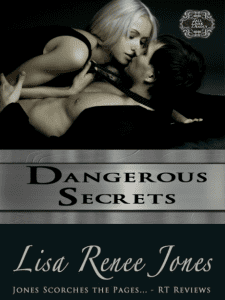 Being a divorce attorney for the rich and famous isn’t all it’s cracked up to be. Julie Harrison has learned that love doesn’t last, and she’s sworn never to make the same mistakes as her mother, or her clients. She uses the games men play to keep them at a distance. The only man who managed to break down her walls was Luke Walker, a Navy SEAL who loved her and left her, and changed her forever.

When Luke arrives back in New York, running Walker Security with his brothers and having left his Navy SEAL days behind, he sets his sights on Julie, the woman he’s always wanted and couldn’t have. Except, she runs from him every time he gets close.

But now, one of Julie’s clients, a powerful judge, gets involved with a dangerous cartel, and his soon-to-be-ex wife ends up dead. Julie’s next on the list, and she finds herself on the run from those who believe she knows too much, and counting on Luke to keep her alive. In the deepest, darkest moments of the night, passion will bring them together while danger threatens to tear them apart. Can Julie and Luke trust each other and find their happy ending before they find … the end?

Booklist says: Jones’ suspense truly sizzles with an energy similar to FBI tales with a paranormal twist by Julie Garwood or Suzanne Brockmann. Alpha, military, and paranormal romance readers will want Jones’ entire series. (About the Zodius Series — Storm that is Sterling)

In 2003, award winning author Lisa Renee Jones sold her Austin, Texas based multi-state staffing agency and has since published over thirty novels and novellas across several genres. Her staffing agency LRJ Staffing was recognized many times by The Austin Business Journal and also praised by Dallas Women Magazine. In 1998 LRJ was listed as the #7 growing women owned business in Entrepreneur Magazine.

Her debuts with Blaze and Nocturne hit Bookscan’s Top 100 list and her Blaze Hotzone trilogy made a showing on the list in 2011 also. With a new Blaze trilogy, a short story for Spice, the third book in her Zodius series published with Sourcebooks, as well as an rapidly growing indie following, 2012 will bring many new stories to her readers. Booklist says about Jones’ suspense: “…truly sizzles with an energy similar to FBI tales with a paranormal twist by Julie Garwood or Suzanne Brockmann. Alpha, military, and paranormal romance readers will want Jones’ entire series.” Lisa is active on Facebook and Twitter, and you can find her at www.lisareneejones.com.You can find Lisa on Twitter, Facebook, and her blog for regular updates. Lisa now has a Fan Page at Facebook.