You are here: Home / Non-fiction / Body/Mind/Spirit / Crooked by Chris Foster 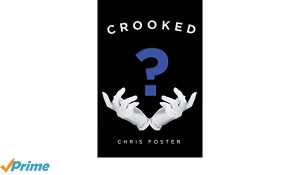 This book is about life. To describe life with a single metaphor would be like putting the universe into a single equation. It is not all that feasible. With how complex it is, everyone’s always trying to figure everything out, their minds kicking up dust as they run and run. But when they sit and breathe, the dust settles, and they see what was right in front of them all along. The chapters explain this meditation perspective and some of its applications. Picture this: if you’re living in the fast lane, everything is a blur outside your vehicle’s window. It is hard to appreciate those simple things if you do not slow down. Discover how the empty mind dwarfs the open mind.

What Inspired You to Write Your Book?
About 3.5 years ago, I started meditating. I was also reading the books Not Always So and Zen Mind, Beginner's Mind by Shunryu Suzuki. My life changed with everything I learned from meditation and the Zen philosophy. I wanted to share what I learned, so I put it into words, and this book was created.

Book Sample
Somewhere sometime someone said or wrote something which stole another's mind and everything on it for a moment, stopping a busy day faster than a screeching halt. He asks to hear it once more so he can put it on repeat in his brain. In his perspective, he does more than think; he reevaluates. Even if he's from a place where free speech could cost him his tongue, he has to talk to loved ones. Casual conversation gets mixed with deep introspection, and they too find treasure buried in time's sand. They too must spread the words that were overlooked by the word of the Gods and the holy books. Soon the phrase flourishes even if electronic media have yet to exist. It's a piece of the third thing that gets exchanged between empires, right beside goods and services. Between languages, letters may get a different scribble, but the meaning won't suffer a scramble. It's not just passed on; it's also passed down. Soon-to-be mothers are eager and always have someone to talk to when nobody else is around. For a while, children just listen and smile, exactly what their parents did upon hearing those words. The years of growing up may shape someone much more than early adulthood years involving any kind of rigorous training. Then that someone may also pass on a piece of the heirloom belonging to Earth's one great big family. Enough generations pass, and new life is first greeted with old wisdom. And it's still floating around as you read this, so you too can pass it on.

So what does one call these phrases that don't require a shaman to light up his hands? Depending on whose eyes your looking into, they may be proverbs or cliches. It's determined by what sublevel that person is on, how deep she is below the meaning's surface. Many people regard certain statements as indifferently as an oncoming car on the expressway. People always repeating those phrases are annoying like the mosquitoes always buzzing near your ear, and you want to smack both of them. But is there more than meets your two eyes? Human vision easily misses the microscopic universe thriving on the skin; why can't the intellect fail to take a closer look? As an example, take the phrase "Go with the flow!" Do you understand what this means? Sure, the intellect has its laugh after two or three seconds. But can you live it? In other words, can you apply it to your life as you would with what's in a physics textbook to the world around you? Can you understand it beyond language, or are you limited to treating it as a short-answer question? Let's say you're handed a complex sheet music for a piano, and you intellectually understand advanced math's cousin at first glance. Yet, you've never played the instrument in your life except to hit that high note for fun. Do you truly understand what's written on that paper? Will the mouth substitute for the hands at a piano concert? Can intellectual understanding substitute for actually playing? Does a couple dozen hours of studying equal years of practice?

Let's say once more what's been said thousands of times to illustrate this point. Return to "Go with the flow!" What does this mean to someone who runs in with guns flexing and blazing, always wanting to catch every last piece and put it in its place with just two legs and two arms? What does this mean to someone who's truly learned empty her mind rather than constantly let it all out? What's it mean if she accepts the events happening on the outside like she accepts the thoughts coming in on the inside, seeing the negative sign as half-complete positive sign with many things and no longer resisting something with billions of horsepower? (every person imagining themselves as knights on steeds) Now consider "Don't give up!" What does this mean to someone who's up in the stratosphere with economic/social privilege and has been spoon-fed when it comes to life? What does this mean to a destitute child who came from where kick the can was soccer and dreams were crushed just as easily under someone's foot, but with sheer effort he succeeded against a mega lottery's worth of odds and obtained a PhD in neuroscience? One more time: "Don't wish your life away." What does this mean to a high-status, high-strung type A personality whose fuel is very little sleep and very much anxiety, never realizing that seizing the day always turns into getting it over with? What does this mean to the same man fifty years later when he's the color of the sheets on his hospital bed, looking back on his life with everything to show for but nothing to live for? "Time will tell" the tale.

Analogously with the conscious and subconscious, knowledge is composed of two things: intellectual understanding and intuitive experience. Intellect can bring you from zero up to full speed in two seconds with simple information, but the connotation developed from experience requires time, kind of like how a climactic event needs eighty thousand words leading up to it. That written incident standing alone would be just another writer imagining his fairy tale. Likewise, a proverb is only a cliche if there's no story behind it. To some, repetition of a cliche may symbolize repetition of effort; they're the next few people to say it out loud, first to themselves and then to others. If they're asked how far they've gone in their travels, they'll eventually remember to look at the hour hand instead of constantly looking at the second hand. Indeed, a simple quote is the best example in the difference between reading and understanding because five words may take five years.

The quote itself is only the first sentence in chapter one; the experience is the rest of the novel. The effort is mountains high, and the meaning is canyons deep. If you're thinking of getting a foot out the door to your world and changing some things, understand that "the journey of a thousand miles begins with a single step." There are words that have always been around to help; take them with you this time. Caution: Don't claim to completely understand it in the same way someone claims humanity knows damn near everything about the universe. If you're not true to yourself, the truth will not come to you. There's no such thing as read the magic words. To find yourself, you must find out for yourself. The meaning surrounds you like sunlight, but you know the latter can be ignored on a busy day. Don't see a cliche as something insipid; see it as a favorite song that you want to play almost every day. Remember, music gets stuck in the head, and words get stuck in the heart.

Give a little each day, and you'll know a little more each day. Eventually, that quote hanging on your wall will start your sunrise before there's light on the horizon. That fine household piece is also a piece of you, and you'll have much more to talk about than where you got it from. With your unlimited time offer, anyone can take your words with them anywhere. Someday they'll have words of their own. Then they're genuine gypsies that walk the streets, storytellers instead of fortune tellers. They're not propagating knowledge because it's been around for a while; they're just getting people to finally listen. They don't spread the news; they just hear the olds. You could travel the globe, but simple sentences would still circle back to you as that's all there really is. If you open your eyes and perk up your ears, you'll understand that it's all you really need. "It's the simple things in life," right?