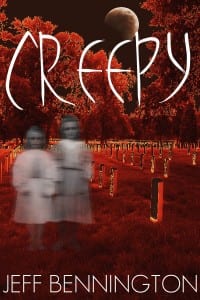 ABOUT CREEPY:
The Creepy series is a one of a kind combination of true supernatural occurances, mixed with a variety of supernatural short stories. Creepy contains The Rumblin’ and Murdoch’s Eyes. Best of all, Creepy includes some of the author’s real life supernatural experiences… absolutely true ghost stories.

“I was around ten years old when I had my first supernatural experience. Thirty years later, my ghosts have returned and they are creepier than ever. I’ve seen full-bodied apparations, felt a dark presence practically breathing down my neck, and everyday I work with a ghost who seems more curious than anything.” ~ Jeff Bennington

The following true stories are all inside CREEPY:

The Shadow Man
The Ghost Named Earl
Someone in the Basement

These ghostly experiences have influenced my writing and allowed me to truly capture the essence of fear and suspense that you’ll discover in my fiction. If you enjoy creepy tales from Stephen King, you’ll love my heart pounding, short stories too.

“Murdoch’s Eyes is a wicked, twisted little tale. A thrilling paranormal both well written and with some truly freaky characters. I don’t think I’ll ever look at anyone with green eyes the same again.” – Jen Wylie, Author of Sweet Light

“Reading the reviews of this book, I wondered if it was all it was hyped up to be. Reading it – I discovered it really was. The violence is beautifully executed, the plot is perfect in its speed and intensity and the characters are wonderfully written. Jeff Bennington has written a stunning story here. Ten out of ten.” – Michael Wilson

Jeff Bennington is the author of REUNION, an Amazon #1 bestselling supernatural thriller, TWISTED VENGEANCE, CREEPY, and CREEPY 2, a collection of scary stories. He also blogs at The Writing Bomb. When Jeff isn’t writing and blogging, he’s busy raising and homeschooling his four children with his wife near Indianapolis, Indiana, which incidentally, is where TWISTED VENGEANCE takes place.

Jeff’s short story, Suka: The White Wolf, was purchased by The Horror Zine and is scheduled for a 2013 realease.

Jeff has written political thrillers, supernatural thrillers and suspense, but he doesn’t want to be pigeonholed. You never know what he’s going to write next, but you can bet that it will be suspenseful, intriguing, romantic or thrilling — but not necessarily in that order. His blog posts can be funny, inspiring or informative; depends on his mood. He is truly a creative soul. He designs his own book covers, has been drumming for over 30 years and loves creating glass mosaics!

You can follow Jeff on Twitter @TweetTheBook and his blog, The Writing Bomb. If you enjoyed any of his works, please write a review and then look Jeff up online. He’d love to hear from you!