You are here: Home / Fiction / Paranormal / Cravings by Lynn Crandall 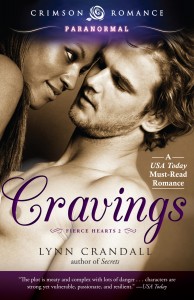 Kennedy, just Kennedy, recently dropped down into the rabbit hole complete with no surname and landed in an entirely different life than the one she’d been living for 22 years. That’s when she learned her parents were people who had been given the job of raising her and keeping from the truth—her real parents were alive and she had been groomed to progress the plans of a secret group. It was also the day she learned her life was in jeopardy and she could trust no one, except maybe the brother she hadn’t known she had, Casey Mitchell, and his colony of were-lynxes.

Always a charmer, Asher Monroe, a were-bobcat who belongs to Casey’s colony, is willing to help her investigate her past. As a sports writer, he is skilled at ferreting out the truth. He’s also willing to use his special ability of “nudging” others to do what he wants so he can learn as much as he can about Kennedy and her life before. He needs to discover whether she is a threat to the colony or simply a lost soul.

As their needs for truth take them into escalating danger, their individual woundings expose what really brings them together and pulls them apart.

What Inspired You to Write Your Book?
Cravings is book two in my Fierce Hearts Series. It follows the developing relationship between Kennedy Mitchell and Asher Monroe, powerful were-lynxes with inner demons to overcome. The book continues the story of the were-lynx colony, featuring the characters from book one, Secrets, as they work together to thwart the evil Nexus Group from taking over the world destroying the colony. What inspired me to write this particular story was a desire to live life through the eyes of people who are not only different but who deal with terrible but common struggles and come to understand that healing their inner wounding is the only way to survive. This is a fundamental truth that we all try to ignore. I think people are fascinating and so complex, and I like to add an additional element to my characters’ journeys, making them paranormal beings.

How Did You Come up With Your Characters?
I planned the series, loosely, all at the same time. I began with character names. Then I built character personalities and conflicts and a developing romantic relationship around each couple. For Kennedy I drew on personal experience and experiences of people I knew to build a strong young woman who had lived under complete oppression. That interested me because it’s not an uncommon situation, but people don’t necessarily see what it does to them. Kennedy’s experiences were extreme, but it elements of reality in it, too. For building her love interest, I wanted Asher to be completely different from her personality. She’s controlling and guarded. Asher is laid back and fun-loving, but deeply hurt by rejection. He’s fun, he’s spontaneous and free-spirited, but he believes he hurts people. Mistaken beliefs about life and about ourselves is a very common situation, so I wanted to explore what that might look like.

Book Sample
Her breath feathered over him, sweet and deeply moving. “I wish I could make everything right for you. You deserve peace and a life of your choice.” He allowed a low growl to rumble up. “I hate what has happened to you. But …” He had to say the right words, words that wouldn’t send her scurrying away. “I’m happy that your path, as terrible as it has been, has brought you into my life.” He barely could whisper the words. He knew he carried his feelings for Kennedy in a special place, protected from the possibility he may hurt her. But God, the gut instinct of reaching to be close to what she brought to him was mesmerizing and hypnotic in that it soothed his fears.

“Kiss me?” She lifted her chin slightly. Her full lips, the luscious color of pomegranate seeds, pulled him close. Just one kiss. He cupped her face in his hands and placed a delicate kiss to her mouth. She pressed her body against his, and he thought how silly he was to think he could tear away with one kiss.

He pulled her closer, never breaking from the kiss. His lips pressed hard against hers, longing to reach her soul. Her heart thudded soothingly against his chest, pushing his pulse higher.
He opened his eyes and met hers, finding himself staring into unabashed longing. “I’ve only been with one man before, Asher. I’m nervous. But I want this very much.”

He placed a gentle kiss to her lips, and his thoughts and fears and objections whispered away. He pulled back, reluctant, dropping his head against hers.