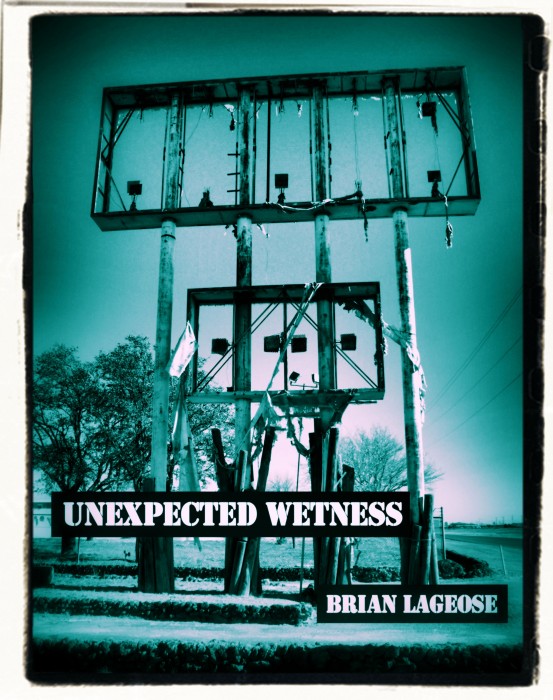 Comments about cover design
The contents of the book concern a very unsatisfactory day that my family spent at an amusement park. While prepping the book for publication and still in need of a cover design, I happened to be visiting relatives in Odessa, TX, and I ran across a “remember when” article in the local paper concerning a once-popular water park that had been abandoned for years. Something spoke to me, in a vague but conceptual way, and I forced my partner, Terry, to drive out to the location. The place was surrounded by security fencing and warning signs, but we found a few dubious access points (criminality is irrelevant when searching for the perfect cover art, yes?). I began pointing things out, and Terry began clicking with his camera.

The shot I finally used is one of the entrance sign to the park, which was outside of the ominous “No Trespassing” fence, thus making our crime spree somewhat pointless. Still, I liked the image of the “sign that doesn’t say anything”, which reflected some of the mind-numbing and futile adventures in the book, as well as the aura of decay, which reflected what I remembered of the amusement park as a child and what it was now. I then went to work with Corel PaintShop, adjusting the image to further enhance both of these design elements. I almost went with a sepia tone, but I decided that doing so would push the book into the past, and I changed to the blue-green tint which still showed the decay but also somehow showed life. (And I chose the “stencil” font to reflect the assembly-line incorporation of family entertainment. Perhaps that’s getting a bit deep, but it was my thinking at the time.)

Note: I am entering this in the “Memoir” category, because it’s a true story, but there are a number of “dream sequences” in the narrative, which did not actually happen, an element I point out on the copyright page of the book. Just giving full disclosure, in case the Book Goodies Gods and Goddesses feel that a better fit would be the “General Fiction” category. (The perfect fit would be a “Humor” category, but this was not an option.)